The best the Jaguars could have hoped for was for Tom Brady’s suspension not to be overturned, because on Sunday that transpired at Gillette Stadium is going to be one of those games that will ultimately make or break their season.

New England handed the Jaguars a 51-17 loss, with the 51 points Brady and the offense put up accounting for the largest point total ever allowed in franchise history for Jacksonville.  This is a team that’s been trying to turn the corner for a while and their win over the Dolphins last week put them right in the thick of contention in their division.  However, if they had any aspirations of taking the next step toward competing with one of the NFL’s elite clubs, Brady put on a clinic that likely left Jaguars quarterback Blake Bortles and the coaching staff shaking their heads while realizing they’ve got a long way to go before they’re at the Patriots’ level.

“OK, we talked to our team about, ‘No one said it was going to be easy and fun, they said it was going to be hard and fun.’ We saw it today, it was hard,” said head coach Gus Bradley after the game.  “We went through a lot of things. I think a lot of lessons can be learned from this game. Give credit to New England. I thought they played a great game.”

“That team played with precision in all three phases. When you play against a really good team, you really see the importance of precision and we didn’t play with that.”

Precision is putting it mildly.  Brady was absolutely surgical against the Jaguars’ defense, showing the most patience he has all season and leading New England to points on all nine possessions on Sunday.  They were so effective that punter Ryan Allen put his pads on purely to be the holder on all six of Stephen Gostkwoski’s extra points and three field goals because Jacksonville’s defense couldn’t slow Brady down.

Bradley complimented Brady after the game, admitting that even when they tried to confuse him he still knew where to go with the football.

“His poise is very good,” said Bradley of Brady.  “He knows the different looks. You try to create some confusion but he knows where to go with the ball and he’s got guys that make plays for him. If it is maybe a little bit misthrown, if there was one, his guys make plays for him. He’s playing really well right now.”

For a guy like Bortles, it was an opportunity to see Brady up close and act as a reminder of the type of player he’s likely aspiring to be.  The only downside was it ended up being quite a blow for a team that coming off their win over Miami thought they were making progress.  Unfortunately the best the Jaguars could have hoped for might have been facing Jimmy Garoppolo, because Brady’s playing at another level right now after finishing another game completing over 70% of his passes, including 88% on third down.

That’s not what they were hoping to accomplish and this one will sting the Jags for a while.  Defensive tackle Roy Miller III knows they’re capable of more and now they’ll head back to Jacksonville to try and figure it out.

“We’ve got high standards for ourselves,” said Miller.  “That just wasn’t it. It wasn’t close to who we want to be. But you have to give credit to the other team. Tom Brady, obviously one of the best quarterbacks to play this game. You try to go in there and think that you’re going to stop them. You have all the confidence in your team. He’s a great player. Like I said we have to go back to the drawing board and figure it out.”

JAGUARS HAPPY WITH HOW THEY HANDLED GRONKOWSKI: 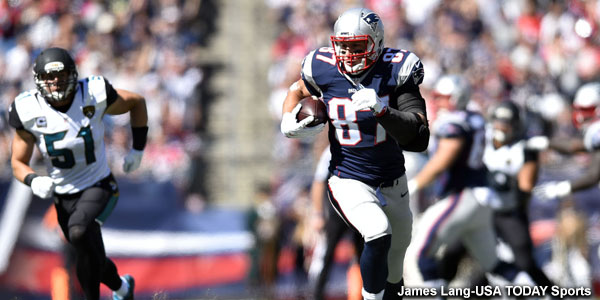 Rob Gronkowski finished Sunday’s game with four receptions for 101 yards, with three of his four receptions going for over 20 yards, including one of over 40.  However, the big key for Jacksonville was the fact they kept him out of the end zone and Bradley was pleased with that result.

“We saw him pretty much all over the place,” said Bradley.  “On the outside, on the inside, in the core. I thought we did a fairly decent job against him.”

Brady finished the afternoon 5-of-9 down in the red zone against the Jaguars, but was 0-for-2 targeting Gronkowski.  It ended a streak of eight straight games with a touchdown including the playoffs for the veteran tight end, which had been the longest active streak in the NFL.  His last game without a touchdown reception was back on November 30, 2014 out in Green Bay.

While Gronkowski didn’t get into the endzone Sunday, recently acquired receiver Keshawn Martin was able to make an impact after catching what ended up being Tom Brady’s 401st career touchdown pass.

Martin was targeted three times on Sunday and caught all three, including his 13-yard touchdown reception.  He admitted he’s been working hard and he’s starting to feel comfortable in this offense.

“I felt pretty comfortable, as far as the plays,” Martin told reporters after the game.  “I felt good going in. This past week, I’ve been studying my butt off just trying to get it down and everything. Going out there today I felt really good.”

“It’s different a little bit, but it’s also got some similarities. I feel like me coming here was a good thing for me, just from the similar offenses and giving me a chance to get on the field.” 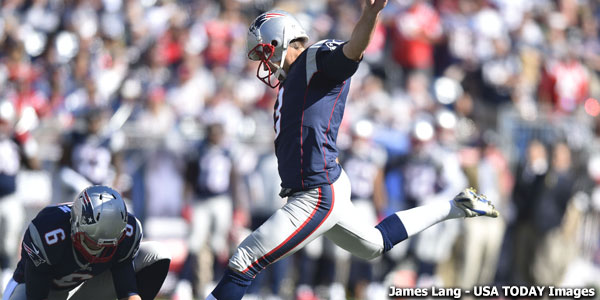 Stephen Gostkowski was rewarded with a four-year extension back in July after previously having been given the franchise tag designation and Sunday was a reminder of how valuable a player he is.

Gostkowski hit his 423rd consecutive extra point with just over three minutes left in the third quarter, moving him ahead of Matt Stover for the all-time lead in that category.  He hit nine kicks total on Sunday, including six extra points and three field goals.  His total now stands at 425 consecutive PATs, so now each one only further extends his new record.  At 31, it could be one that may become pretty tough to break and even more so now that the league has moved it back to being a 33yd attempt.

His milestone came on the same day as Brady’s 400th touchdown and Belichick said afterwards that he’s just glad to have had the opportunity to have coached both players.

“Tom and also Steve [Gostkowski] today. That takes a lot of games, a lot of snaps to do that, and it’s certainly a tribute to both of them,” said Belichick.  “The durability, longevity and obviously consistent production that both of them have had. So, I feel really fortunate to have coached and had guys like that on our team, and those two guys in particular, they had a good day as they’ve had for many, many days in their career. I’m really fortunate to have those guys on this team.” 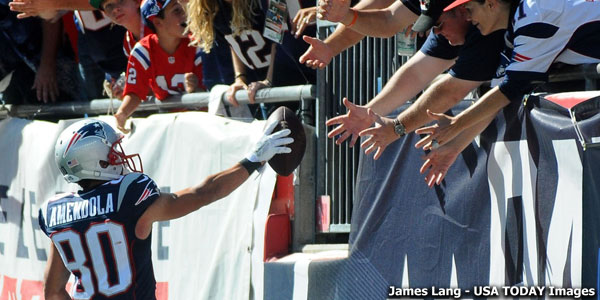 Danny Amendola was so excited about scoring a touchdown Sunday that he completely forgot what he was doing when he handed Brady’s 400th touchdown football to the crowd after he scored.

“I didn’t realize it until halfway back to the sidelines, that I gave the 400 ball away,” Amendola told reporters after the game.  “But we got it back and [Tom Brady] got it, so it’s good. It was a great pass, a great play and we ended up getting six points out of it. It was a solid start to the game.”

Amendola now has the honor of being an answer to the trivia question, “Who caught Tom Brady’s 400th touchdown pass?”  But for now, it’s not something he’s too concerned with.

“I haven’t even thought about it really. But Tom [Brady] is such a great player. He’s thrown a lot of touchdown passes, just to have one of those 400 is pretty cool.”

For anyone who might be wondering who Brady threw his 300th to, it went to Rob Gronkowski back on January 1, 2012 against the Bills. That was also the game where some might remember saw Brian Hoyer, in garbage time, come in and rather than kneel on the football, he instead threw one final pass at the end of the game for 22-yards to ensure Gronkowski finished ahead of New Orleans tight end Jimmy Graham for most yards by a tight end in a season.

His 200th career touchdown pass came in Week three at home against the Falcons back on September 27th, 2009, which came on a 36-yard pass play to then tight end Chris Baker during a 26-10 win.

READ NEXT:
Brady Further Cements His Legacy Among the Greats in Patriots Win Over Jags
Posted Under: Patriots Commentary