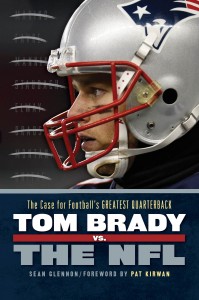 “Tom Brady is the greatest quarterback in NFL history,” is the theme of Sean Glennon’s excellent book, "Tom Brady Vs. The NFL: The Case For Football's Greatest Quarterback."

Before I begin, let me preface this review by stating that I generally dislike the talk about the G.O.A.T. (Greatest of All Time) in any sport as trying to compare eras in the NFL as in MLB is fraught with roadblocks of all kinds.

Many times if you have read articles on the G.O.A.T., regardless of the sport, authors generally make their point by denigrating the accomplishment of others, and sometimes get downright insulting. Having read some of Glennon’s earlier work, I knew this wouldn’t be the case. And it wasn’t…

Perhaps the greatest thing about this book is that Glennon puts out his beliefs that Brady is the best quarterback ever to play the game. And then backs them up with facts. But the manner in which he does so is not to insult or belittle the many great quarterbacks that have come before Brady. No talk about modeling or marrying a supermodel, or his hair. If you’re looking for the TMZ version of Brady, this one isn’t for you, but if you want to talk about and read about football this book will be manna from heaven.

Glennon puts his facts and stats out there with Brady compared to 15 of the NFL’s greatest quarterbacks including Sammy Baugh, Otto Graham, Johnny Unitas, Bart Starr, Roger Staubach, Joe Montana, Dan Marino and Peyton Manning; each is paired with a side-by-side career comparison with Brady.

Glennon also includes some of the top current quarterbacks in the NFL, Drew Brees, Eli Manning, Aaron Rodgers and Ben Roethlisberger and does a quick analysis of them compared to #12 for the Patriots.

While I think that Glennon is a tad underrating Manning the Younger in his book, it is fine. His book is designed to provoke discussion and give and take which he is always happy to discuss, on his Twitter account, or as we had the pleasure of hosting him on our podcast, Patriots 4th and 2 as a special guest.

Glennon looks at Brady’s accomplishments and fight to start at QB for the Michigan Wolverines and how he wasn’t highly regarded coming out of college as a skinny, un-athletic 6th round pick in the 2000 NFL Draft. The drive to win and compete still burns brightly in Brady and his passion has allowed him to remain at the top of his profession for over a decade.

He also includes a season-by-season review of Brady from 2001 to present with the Pats, as well as various records he’s set in his career. Included of course in the intense rivalry Brady and Peyton Manning have had in the NFL. Both players read a defense better than anyone in the business and can take one look at the alignment of the defense and be able to predict what the defense will do.

Then Glennon compares Brady with the winners of back-to-back Super Bowls, which strangely omits Miami Dolphins QB Bob Griese from the conversation but includes:


Glennon offers great praise for not only Brady but Bill Belichick as well. “Belichick and Brady have been the most dangerous combination of coach and quarterback in the history of the NFL—more dangerous than Lombardi and Starr, Shula and Marino, or Walsh and Montana,” he says.  “They are the winningest coach-quarterback pair in NFL history, holding records for both regular-season wins (124) and postseason wins (16) as of the start of the 2012 NFL season.”

One area where I disagree a bit with Glennon is that while Green Bay’s Vince Lombardi “is still regarded as the greatest coach in the history of the pro game” but wonders if Bart Starr would have been a success without his coach.

Stating that before his arrival and after Lombardi left, Starr’s performance was lacking. Perhaps a bit unfair, however he does add that “None of that undoes the fact that when Starr was at his best, he was downright unstoppable.  But it does leave one to wonder how much of Starr’s success was Starr and how much was Lombardi.”

He obviously doesn’t have a great opinion about the quarterbacking abilities of Bradshaw, although gives him great kudos for stepping up in the biggest of games. He points out that Pittsburgh coach Chuck Noll didn’t ask Bradshaw to win games but not lose them and relied on their stellar defense from the 1970’s.

The book is a fantastic read; I received it and couldn’t put it down until it was done in the wee hours of the morning. It is a must read not only for die-hard Patriots fans but fans of the NFL as well. Glennon makes some very compelling arguments for Brady as the best QB ever to lace them up.

While writing this column a friend of mine asked me the $64 question, “if you had to win a game with two minutes to go and you had to choose between Brady, Peyton Manning or Joe Montana, who would you choose?” My answer was if I had any of those three, I’d be blessed. Glennon will take Brady over anyone, and no one can find fault with his assessment after reading this book.  And this is coming from a firm believer in Joe Montana as being #1.

One of the more memorable passages and delves into the drive of Brady comes from Patriots owner Robert Kraft who said, “I still have the image of Tom Brady coming down the old Foxboro Stadium steps with that pizza box under his arm, a skinny beanpole and when he introduced himself to me and said, ‘Hi Mr. Kraft.’ He was about to introduce himself and I said, ‘I know who you are, you’re Tom Brady our sixth-round draft choice.’ And he looked me in the eye and said, ‘I’m the best decision this organization has ever made.’ That brash statement, sums up Brady in a nutshell, and… is the absolute truth.