Hurley's Picks: Now We'll See If The Patriots Are As Good As Everybody Says

Fear of a Patriots vs. Buccaneers Super Bowl grips the nation 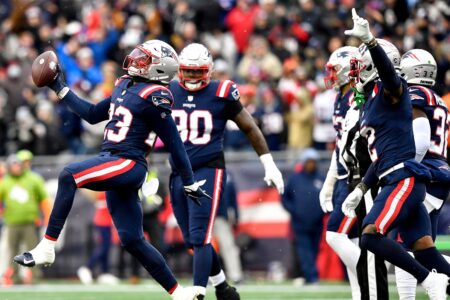 FOXBORO, MA -- It's doubtful anyone on the Steelers will be saying the best team didn't win this one.

Nor should there be any more words coming out of the Steelers locker room.

Not for a long time.

The Patriots went into their own locker room up by just 3-points at the half, but they exploded in the second half scoring 20 points en-route to a 30-14 victory over the Steelers on Monday night.

Quarterback Tom Brady played well, finishing 29-of-43 for 294 yards and 3 touchdown passes which went to three different receivers.  Christian Fauria, Deion Branch, and Donald Hayes each had TD grabs from Brady who at one point attempted 25-consecutive passes and ran a no-huddle offense during much of the night.  He got solid protection from his offensive line which also opened up holes for runningback Antowain Smith who rushed for 60 yards on 17 carries.

Meanwhile Pittsburgh quarterback Kordell Stewart didn't fare quite as well.  He opened the game with two interceptions in his first three pass attempts, and was never able to get the Steelers offense in gear.  To make matters worse their running game didn't fare any better, with Jerome Bettis having yet another poor outing against the Patriots.  The New England defense held him to just 35 yards on 8 carries including a fumble which resulted in a touchdown for the Patriots.

It was a bad night overall for the Steelers who committed 13 penalties for 113-yards, and also had 5 turnovers in the game.  They were shaky at best on offense, and as the game wore on they began to hear it from the sold out crowd at Gillette Stadium who spent much of the third quarter singing "we are the champions" and taunting the frustrated Steelers who were outgained by an embarrassing 228 to 142 yards in the second half, 66 of which came on their final drive of the game..

On defense Patriots' cornerbacks Ty Law and Otis Smith did a very good job for two "average" corners, keeping Plaxico Burress and Hines Ward quiet for most of the game despite two pass interference penalties on Law in the first half.  Burress finished with 1 catch for 11 yards, while Ward was held to 90 yards on 8 receptions including a touchdown.  Despite the total 35-of Ward's receiving yards came in mop-up time in the fourth quarter.

Bill Cowher's bunch saw many opportunities disappear due to penalties, including a drive that took them all the way down to the one-yard line that following a false start penalty, an unnecessary roughness call on Fuamatu Ma'afala who got into a scuffle with Milloy, and another false-start penalty left them with a 39-yard field goal attempt.  The kick sailed wide left, and pretty much summed up what was an overall disappointing performance by last year's AFC runner ups.

To make matters worse they not only played poorly, but with 10:30 left in the game down 27-7 Jason Gilden celebrated after a tackle on wide receiver Troy Brown on a meaningless first down play.

Gilden may never have gotten the point, but the Patriots can now sleep soundly knowing they certainly made theirs.

The Steelers opened the game with an interception by Stewart to Terrell Buckley, and on their next possession Pittsburgh watched Kordell give the ball right back on his first pass attempt.  Brady then took New England 26-yards on four plays which resulted in a 4-yard touchdown pass to Christian Fauria with 10:57 left in the first quarter.

The Steelers would answer however, driving 74-yards on 10-plays with Stewart finding Hines Ward from 13-yards out, and just like that Pittsburgh had knotted the score at 7-7.

But that was as close as they would get.

The second quarter saw just a 45-yard field goal by kicker Adam Vinatieri, however New England opened the second half with a 4-play 74-yard drive that ended on a 40-yard touchdown pass to wide receiver Donald Hayes after he came back on a curl route and received a solid block by Deion Branch which left Hayes free to scamper off to the endzone to put the Patriots up 17-7.

Jerome Bettis would fumble on the Steelers next possession, and it lead to a 22-yard touchdown pass to rookie phenom Deion Branch.  The play was set up by a 19-yard grab by Troy Brown on a play where he was able to get both feet down in bounds on a call which required a second look by officials after it was initially called incomplete.  The lead was now 24-7, and the rout was on.

Stewart would throw another interception which would set up a 28-yard field goal by Adam Vinatieri, and the Steelers went down 27-7 late in the third quarter.

New England would later add a 22-yard field goal, and on Pittsburgh's final possession Kordell Stewart finally reached the endzone on a 1-yard run to add a meaningless touchdown to end the game.

Nevertheless one thing is for certain.  If there was any unfinished business, it was the Patriots who took care of it Monday night.

GAME NOTES: John Madden said during Monday night's broadcast that Brady reminded him of Joe Montana because of his "calmness" and also spent some time still trying to explain his comments about New England's decision to go for the win during the Superbowl.  Hey John, get over it......Otis Smith kept Pittsburgh receiver Plaxico Burress quiet, holding him to just one reception for 11-yards......Terrell Buckley apparently seems to work well in Belichick's defense with his two interceptions Monday.  He resigned with the team last Thursday after he was cut by Tampa Bay......Fans sang "We are the Champions" late in the third quarter following Buckley's second pick......Joe Andruzzi started the game but Adrian Klemm saw a lot of action at left guard......Brady was the 1st Pats QB other than Drew Bledsoe to start season opener since Hugh Millen did so back in 1992.