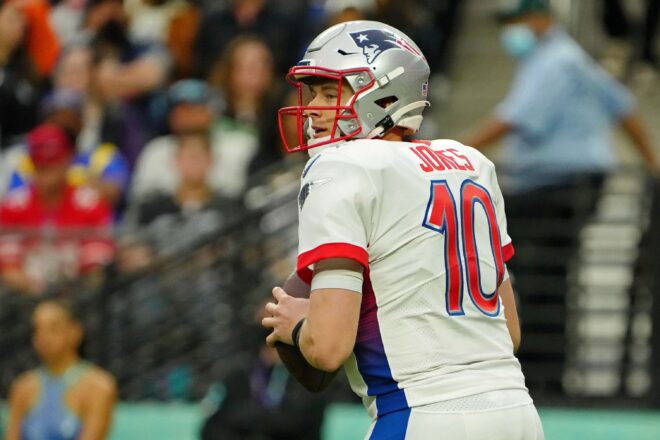 Mac Jones has been in the headlines for several reasons over the course of the 2022 Pro Bowl. He was able to come up with the most reps for any AFC team that was able to claim a win. The 23-year-old is preparing for his second season with the New England Patriots. Unlike in the first season, Jones will be up against a lot of expectations. The expectations are especially high considering the exploits of Joe Burrow for the Cincinnati Bengals in their run-up to the Super Bowl. However, Jones will also have to overcome several other new obstacles at Patriots.

A number of offensive coaches have left the Patriots including the departure of Josh McDaniels, who was the quarterback coach for the team as well as the offensive coordinator. Mick Lombardi has also left the team and the team has to undergo a major adjustment as a result. There is a potential for Jones to suffer as a result of the substantial changes at the club. Joe Judge has been brought in as the new offensive assistant and he is expected to take most of the duties of McDaniels. Similarly, Carmen Bricillo, who was the offensive line coach, has also left the team.

Ahead of the new campaign, Jones has downplayed the pressure on him to deliver in the crucial 2nd season. However, those statements are unlikely to have any impact on the expectations, which continue to be sky-high, as per the latest sports betting odds.

Jones also had to comment on the departure of many of the coaching staff. He does not feel that the impact would be huge, as there are plenty of positives to look forward to when working with new coaches. Furthermore, the team looking to bring in Bill O’Brien as the new offensive coordinator. Contrary to the belief that the departure of institutional knowledge could be a significant blow for the team, Patriots are banking on the presence of Bill Belichick. This off-season will be key for the Patriots, who need to bring in the right kind of mentality to have any success in the 2022 season.

One of the reasons for Jones downplaying the change of coaches would be the experience that he had working with different coaches at Alabama. During his time at Alaba, the 23-year-old was able to set numerous NCAA records for pass completion and more before going on to win the 2021 College Football Playoff National Championship title. Jones joined Patriots as part of the 2021 NFL draft in the first round.

Even though the new campaign begins with a lot of uncertainty, there is plenty of reason to be bullish. After missing out on the postseason for only the first time in more than 10 years, the Patriots are clearly going through a transitional phase that can only end well when players like Jones are able to perform at their very best. In the 2021 regular season, New England Patriots finished with a record of 10-7. This was better than their return of 7-9 in the 2020 regular season when they also missed out on the play-offs.