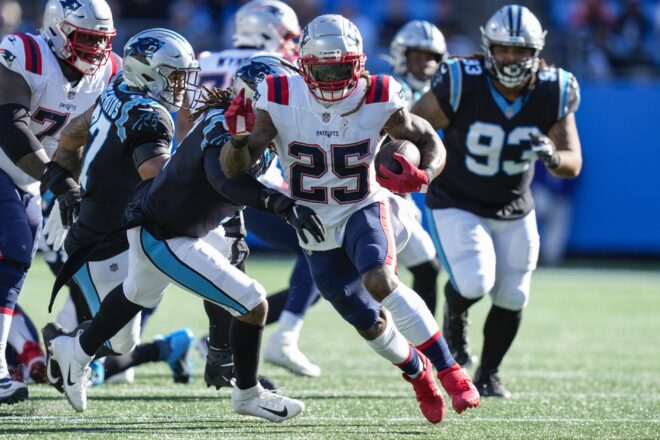 New England Patriots running back Brandon Bolden wants it to be known he is not retiring from football this offseason.

The speculation of an impending retirement began once Bolden shared the following posting to his Instagram page that featured a heartfelt appreciation message for his coaches and teammates following the team’s wild-card loss to the Buffalo Bills.

“First and foremost it was an absolute pleasure play with this team this year. What can I say, not the full results I had in mind, but this was by far the most fun I’ve had playing football in a while. I want to really thank you coaches and teammates for the opportunity to be a part of the beginning of something special. This was a really special team with extremely special people. I appreciate every man that stepped foot in that locker room. You guys really made an old guy feel kinda young. To see what I’ve seen and been through all that I have, I appreciate all of you and am extremely proud to not only call y’all my teammates but my fam. Love y’all boys and I wish nothing but the best to all of you”

In the hours that followed, many of Bolden’s fans on social media began misinterpreting the posting as him saying farewell to football after nine seasons instead of paying tribute to his team following the end of the season.

Bolden later squashed the rumors by clarifying the Instagram post over Twitter, explaining that he not retiring and there is “a whole lot left in this tank”.

Bolden enters the 2022 offseason as an impending free agent following his two-year contract in 2019 to return to the Patriots after a season in with the Miami Dolphins. He did not play in 2020 after electing to opt-out over COVID-19 concerns.

Following the season-ending injury to James White, Bolden took on a larger role in the offense to help fill White’s loss by becoming the team’s main passing back.

In 17 games, Bolden put together the most productive offensive season of his nine-year career, averaging 5.1 yards per carry (44 rushes for 226 yards), 41 receptions (fourth on the team), and 405 receiving yards (a career-high) with two touchdowns.

Back in December, head coach Bill Belichick shared lengthy praise for Bolden and his contributions.

“He’s a good personality that blends that serious, competitive, business side with enjoying the process and enjoying what we do and giving us some of his best performances at the most critical times and biggest games when we need them most. And he’s always done that, whether it’s a couple plays a game, or catching five or six passes in a game, or taking over James [White]’s role this year. He’s always ready to go. He’s dependable, he’s consistent. Everybody knows we can count on him whether that’s in the kicking game or offensively catching a ball, blitz pick-up, running the ball.”

So with retirement rumors now gone, it remains to be seen if Bill Belichick reward Bolden with a new deal.

By: Mark Morse
Both games are in the books and we have learned about several players we have not seen play.  The practices leading up to the games…
15 hours ago