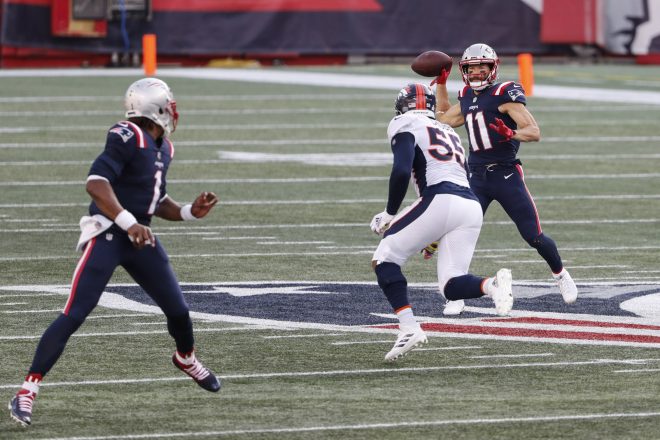 “The squirrel” will not be hibernating this winter after all.

As the New England Patriots continue preparations for the Miami Dolphins this Sunday, they may be adding an added boost to the offense in wide receiver Julian Edelman.

While his status for the game remains unclear, Edelman returned to practice on Wednesday for the first time since he landed on injured reserve back on October 31st, but he has yet to be officially removed from IR at this time.

Edelman missed the last seven games this season as he recuperated from a procedure on his knee.

Although Edelman returns to a Patriots team that now has small odds of making the playoffs, a few teammates shared their excitement of his return.

“I think everybody took note of him”. Gunner Olszewski said Thursday. “I was talking to him just yesterday, I was telling him, ‘I hope you’re out there.’ It gives us a little spark of energy. It’s Julian. He sets the tone. He’s been set the tone for not on the receiver room, but I think the team, for a long time. Having him out there, I think it brought a little spark back to everybody — a little pep in your step. JE11’s out there. That’s what I told him. I said, ‘It’s awesome having you out there.’

Fellow wide receiver Damiere Byrd also shared his reaction to Edelman being back.

“It was great to be able to see somebody like him get back on the field. You never want to see a teammate get hurt. So being able to have him back after a number of weeks is exciting. I know he’s worked his tail off to get back on the field better. So I’m excited to see how he progressed.”

On Instagram Thursday, Edelman shared some photographs from his practice in the Gillette Stadium bubble alongside an optimistic message that read “Better than the day before. #KeepMoving”.

In his six games played this season, Edelman has 21 receptions for 315 yards this season with no touchdowns.