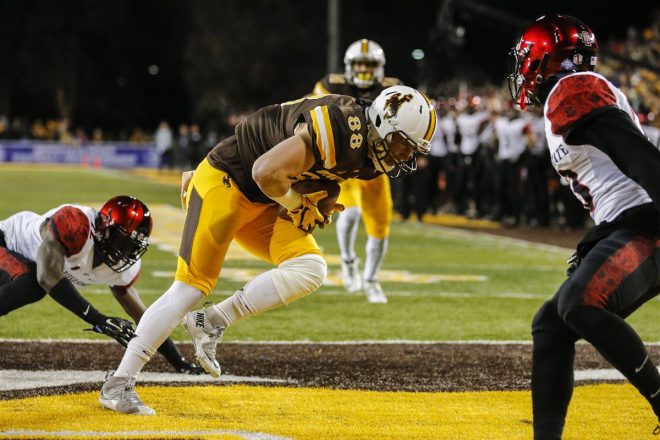 There always seems to be at least one undrafted free agent [UDFA] that makes the Patriots 53-man roster out of training camp. Bill Belichick has never been one to care where a player was drafted only that he can play, is coachable and one that football is very important to.

This year’s undrafted rookie free agent crop has [for now], 19 names on it. While these players are yet to take the field with the veterans in any kind of workout yet, there are a few names that jump off the page. Among them are tight end Jacob Hollister and LB Harvey Langi.

Hollister is a tight end but at 6’4, 239-pounds he’s more of a “move” or a “U” type tight end than the inline or “Y” tight end like Rob Gronkowski and Dwayne Allen. While a willing blocker in the run game, he doesn’t have the strength or the punch to drive defensive linemen back. He won’t line up inline much in short yardage.

Hollister, as one would expect of move tight end has good speed and athleticism. He logged a 4.64-second time in the 40-yard dash with a 36 1/2-inch vertical leap, a 10-foot, 1-inch broad jump, a 4.34-second short shuttle and a 7.12-second time in the all-important 3-cone drill that the Patriots really like to evaluate their receivers.

Hollister caught 32 passes for Wyoming in his senior season, good for 515 yards and seven touchdowns. He showed an ability to stretch the seams of the defense. Hollister was targeted 11 times in 2016 where the ball was 20 yards or more in the air. He caught seven of those for 189 yards and three touchdowns.

He runs nice fluid routes, can move around the formation to create mismatches against linebackers and is a threat to stretch the field attacking the seams. He can create some separation and has good ball skills. Wyoming at times lined him up in the backfield as an H-Back. His value will lie in that the Patriots when they go with a two-tight end set with him and Gronkowski, is that they’ll be dictating to the defense. If they play a base look, he’d be isolated on a linebacker. In a sub-package look, Hollister would have single coverage on a safety.

With some work on his run blocking and gaining the trust of Tom Brady in the passing game, Hollister could be a steal. The Patriots gave him $90,000 in guaranteed money. Which is high for an UDFA.

Langi was a Swiss Army knife for BYU where he transferred from Utah after taking two years off to complete his two-year mission to fulfill his Mormon LDS obligation. So he’s an older [25] prospect. Part of his versatility was possibly the reason that he fell in the draft right out of the seven rounds.

He was effective at inside linebacker but the team switched their defense up and tried him as a 4-3 edge rusher, something he wasn’t particularly suited for. He is listed at 6’2, 251 pounds but he’ll probably ditch 5-10 pounds and lineup full-time as a linebacker in the Patriots scheme which should help his mobility.

He’s at his best when he’s playing a downhill, physical style of football and plays the run extremely well. The Patriots will probably play him inside or on the strong side. While not great in coverage, he shows good depth in his drops. He can easily play in the short-to-intermediate parts of the field.

Langi moves well and has good athleticism running a 7:00 in the 3-cone drill. He’s a guy that can back up Hightower at the Mike or line up at the SAM. He’s a good blitzer up the A-gaps and that is a better look for him than on the edge.

The Patriots gave him the most guaranteed money of their UDFAs with $115,000 fully insured so they obviously think he can contribute this season. He’ll be an immediate contributor on Special Teams and become part of the rotation at linebacker.

Hollister and Langi aren’t the only two who could land on the roster this season. One never knows how things play out and how many injuries occur in minicamp and training camp. But in looking for a couple of guys who can crack the 53-man roster in early May? These two should be at the head of the list.