Lost in the aftermath of Sunday’s win over the Redskins and having Dion Lewis lost for the season on IR is that the Patriots still have an offense that is going to be awfully hard to stop.

Not that they won’t miss Lewis…they will. He was simply electrifying and had the ability to make multiple people miss every time he touched the ball. His 622 total yards rushing and receiving averaged out to 88.8 yards per game when he was out on the field.

And while the tandem of Brandon Bolden and James White can’t replicate the elusiveness that Lewis showcased, they can still be very effective complimentary weapons in the Patriots passing game. A look at the NFL’s Game Pass, All-22 film, the Patriots can put too many weapons to bear for opponents to cover.

In our Razor’s Edge pre-game matchup piece on PatsFans.com, we pointed out that the Patriots would really stress the Washington defense when they split Dion Lewis out wide and isolated him on a linebacker. The Redskins would already have their hands full trying to cover Rob Gronkowski, Julian Edelman, Brandon LaFell and Danny Amendola.

By going empty, Tom Brady has more weapons to utilize than most teams will be able to cover and a play in the first quarter and the final one show just how effective this offense can be. And by utilizing a small gesture, Brady can alert the receiver where he’s going with the ball. It shows how in sync this offense is.

Both plays were deep passes to backs out of the backfield. Both were plays where Brady and the offense went to an empty backfield. Both should have gone for touchdowns. These plays will continue to be there for the rest of the season regardless of who is in the backfield.

First Qtr Near Miss: The first takes place on the Patriots first drive of the game; they’re facing a 3rd down and 2 at the Redskins 33 yard line. The Patriots go five wide with Edelman, Gronkowski and Lewis split wide right and LaFell and Amendola split left.

The Redskins are in a two-deep safety shell and Lewis is isolated on LB Perry Riley who gives him a deep cushion. Brady recognizes immediately where he’s going with the ball upon recognizing the defense. Just prior to the snap, he gives Lewis a small fist pump behind his back telling him to run a Slant & Go route. 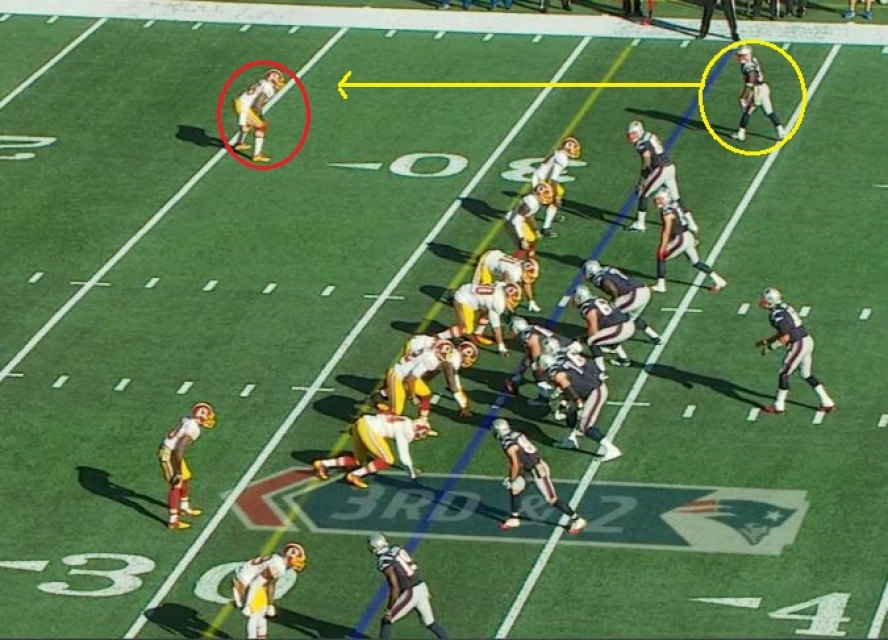 At the snap Brady freezes deep safety Dashon Goldson by staring down Amendola and at the last second turns and fires a perfect deep ball to Lewis, who stutter-stepped at 8 yards and left Riley in total chase mode.  Goldson can’t recover in time and get over to help Riley.

Luckily for the Redskins, Lewis lost the ball in the sun and it bounced off his facemask and hands incomplete. 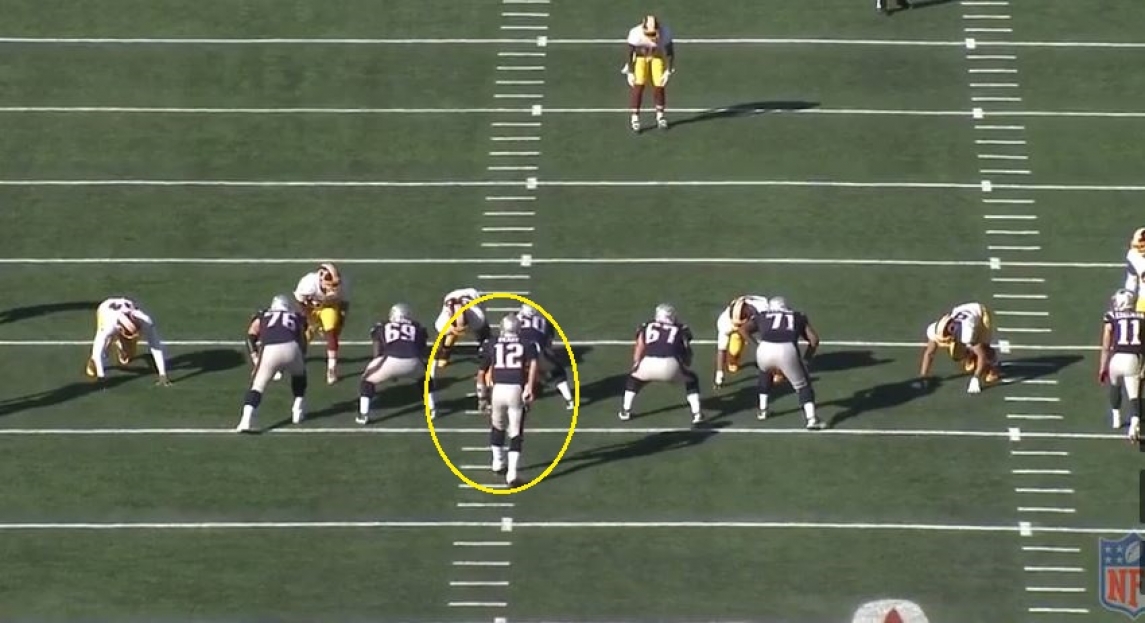 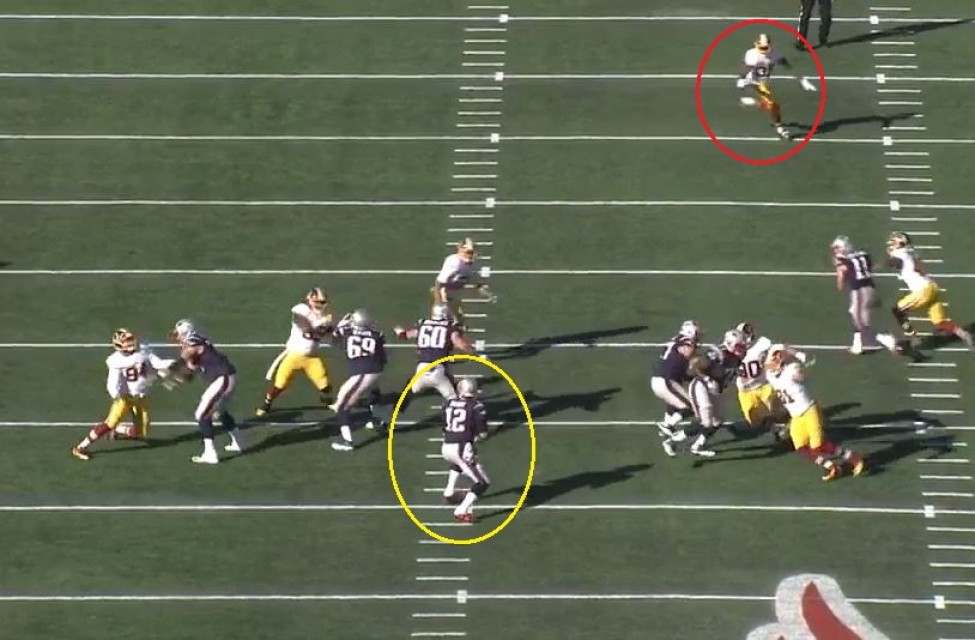 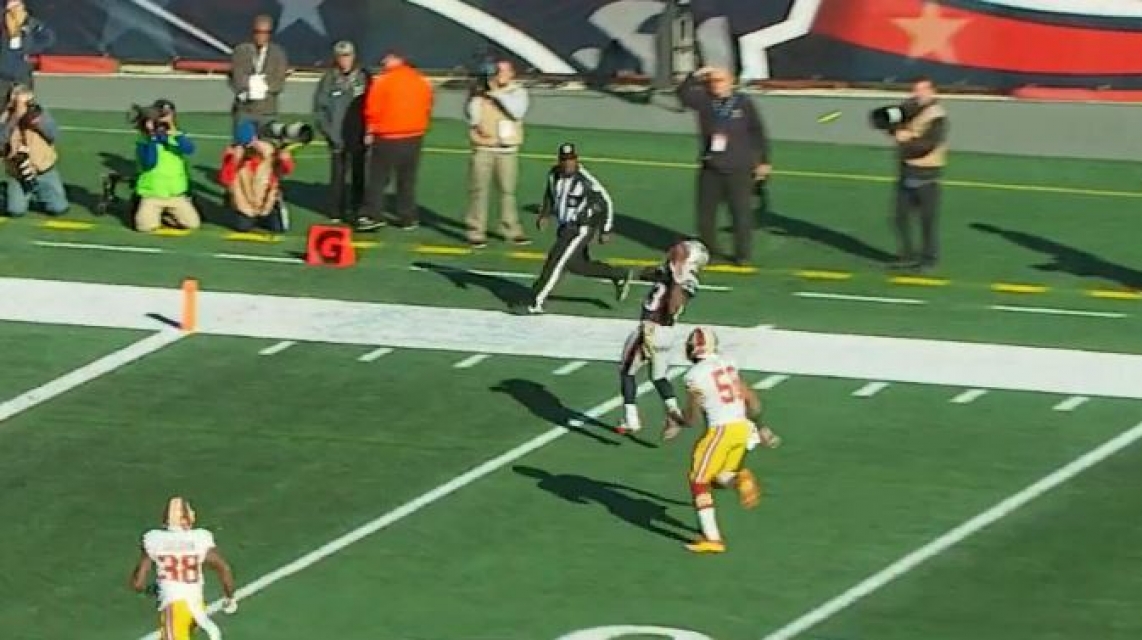 4th Qtr Paydirt: Later in the game after Lewis was hurt, the Patriots are facing a 3rd and 8 from the Washington 18 yard line. They run the same play, however this time the three receivers were to the left and Julian Edelman and Brandon Bolden were lined up to the right. 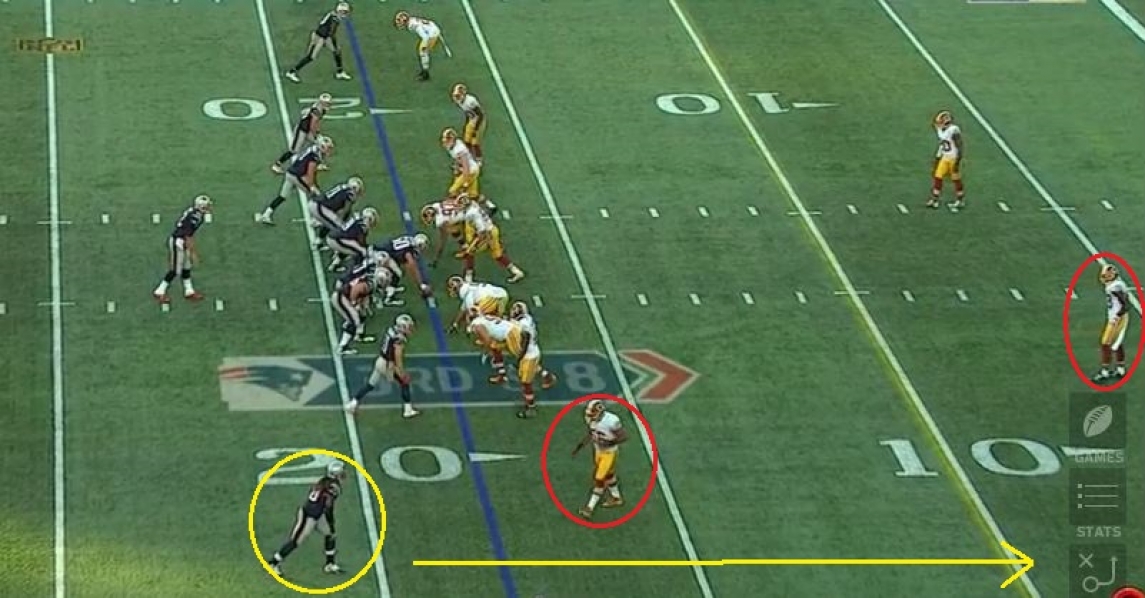 Riley was in coverage again and although he gave tighter coverage he was giving Bolden almost free access to the outside as he was protecting the inside against the slant.  At the snap, Brady again froze Goldson with a look to the left as Bolden blew by Riley at the 10-yard line and had an easy pitch and catch with Brady for the touchdown. 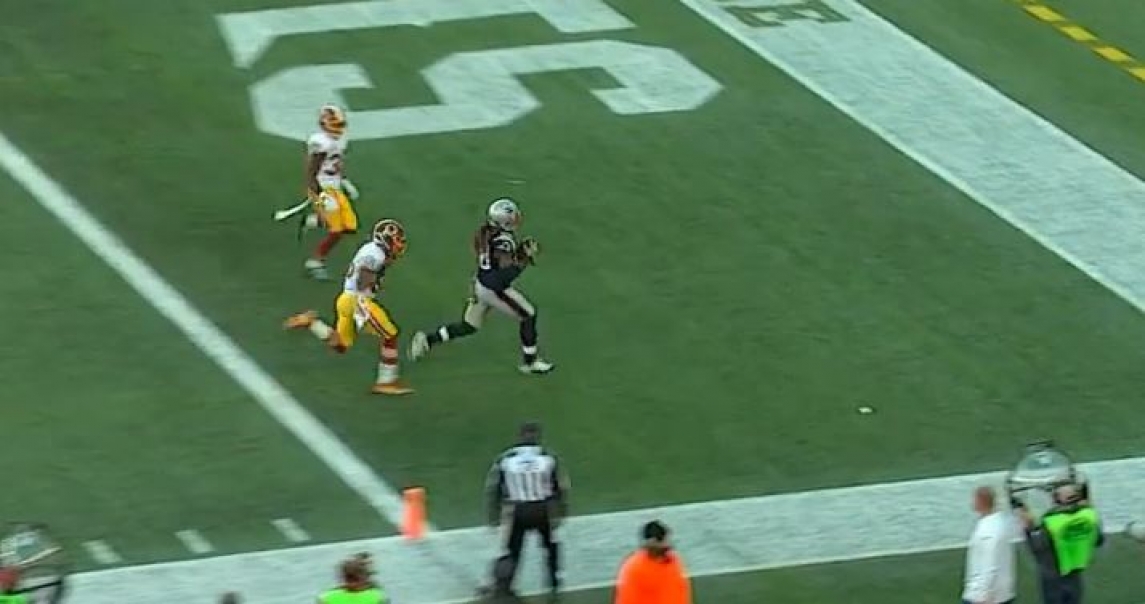 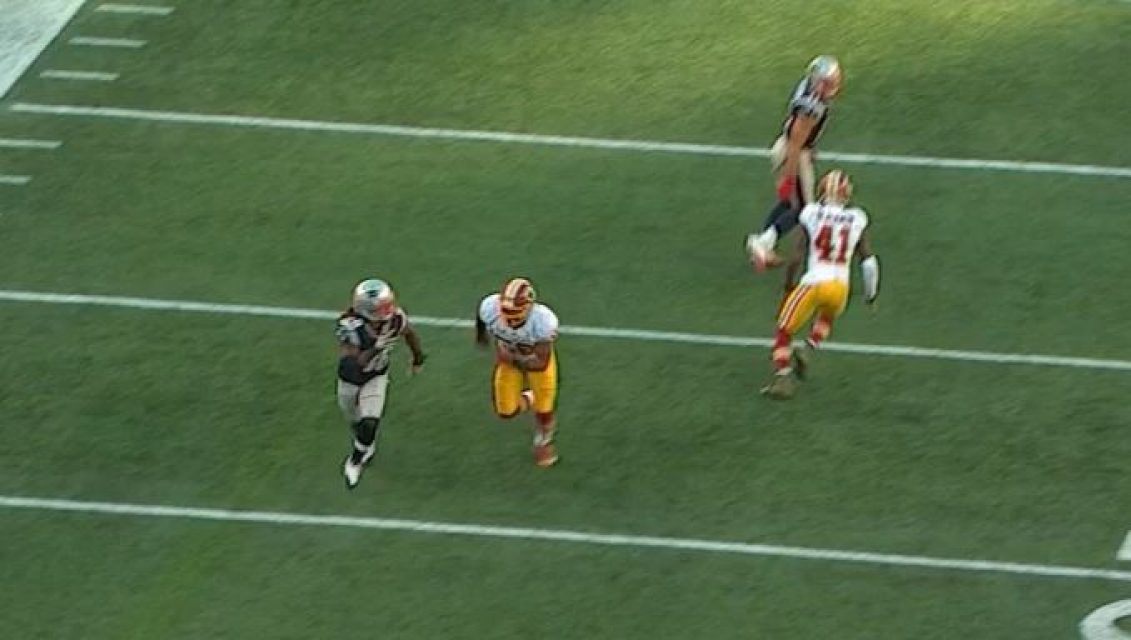 It shows just how many mismatches they can create with the weapons that Brady can bring to bear. The loss of Lewis will be felt, no doubt. But it will be eased somewhat now that LaFell is nearer to 100 percent. He brings an added dimension to the offense and had a big day with 102 yards receiving on 5 catches.

Bolden and White will both have to chip in but the offense can operate just as effectively. They’ll have to get healthy along the offensive line first. If anything can hold them back it is that.

We’re on to the Giants…

By: Mark Morse
This is an accumulation of observations of the last two practices.  The Joint practice was especially lively and dominated by the Patriots' Defense.
16 hours ago

By: Ian Logue
Some bad news for veteran defensive back Malcolm Butler, who saw his comeback season come to an end before it really got started.
16 hours ago