We all need to temper our expectations

amfootball said:
Should be an improvement for sure but losing Gilmore is HUGE.
Click to expand...

Each has a very good stable of WRs and are going to be tough. Miami, Jets and Houston should be winnable.

n6249c said:
Dangnabit, who changed the title? I liked it the old way!
Click to expand...

That wasn't me. lol

betterthanthealternative said:
Jones is WAY ahead of where Brady was at this stage of his career.
Imagine if that is a continuing trend, not a status. By the end of year two, he'll be so far ahead of Brady we won't even use him as the reference point.
Just sayin'.
Click to expand...

So he's ahead of Mahomes. Nice.
When's the passing of the tourche?

Please to help me with my rucksack.

The one thing mac 10 has to work on is feeling the pressure and maneuvering in the pocket. Escaping the pocket. He’s mobile enough to make things happen.
N

Ochmed Jones said:
The last time we drafted a kid from Alabama in the first round of the draft, that won two college championships while at Alabama, it worked out really well for us.


He’s gonna surprise a lot of people on this board and around the league. This kid is the goods. Still love the traditional pocket passer.
M

amfootball said:
.I am really excited for the 2021 defense even starting without Gilmore, I think the secondary is better with Dugger and Williams improvement.
Click to expand...

???
The improvement in Dugger and Williams makes up for Gilmore?

Horace's Ivories said:
I am looking forward to the DL - especially the pass rush..
Click to expand...

mgteich said:
???
The improvement in Dugger and Williams makes up for Gilmore?
Click to expand...


Yeah I dunno about that. One could maybe say the overall defense could be improved if the front seven is outstanding this year and makes up for not having Gill. But our secondary has definitely taken a hit from last year until gill returns.
R

I think Jones got overlooked and is still being overlooked because he's a pocket passer and not as mobile as the other guys drafted.

But we forget what's most important in the NFL really is reading the defense and making the right throws to the right guys. And Mac can do that. He has a high football IQ so he will do well.

Was manning, Brees or Brady the most athletic guys?
R

A good TE is a necessity for a young QB. We got TWO - Check

A system that fits his skill set - check

A good defense - Check (and maybe even be a great one)

So basically he is in about the best situation to start his career as you can think of. Only one area that isn't a check. But I contend if they are just average, the rest of the package makes up for it.

Like I've said before, my only concern is how he'll make out with his durability.

This is a "playoff caliber team" even with a rookie QB. The problem is there are at least 10 other teams in the conference that can say the same thing at this point. On the 12th the 17 game war of attrition begins, and during that war anything can happen. That's the beauty of this league. On any given Sunday, any team can beat another. All we know for certain is that we are likely to be entertained by 17 close games and history tells us that we will win our fair share./

And to the OP - PLEASE change "tampering" with TEMPERING - It hurts my brain every time I see your thread title
Click to expand...

There is another piece to this as well, revolving around the coaching.
We’ve seen with Brady and cassell the way the coaching staff approaches young first time starting QBs.
The popular approach is protect them by running a lot and not asking them to do too much. But from what I’ve seen belichicks approach is to let them cut it loose in the right situation and protect them from the wrong. So with a game plan drive scheme, I am sure we will see games where they can exploit the pass d and they will throw a lot. We will also see heavy use of play action, no huddle, and easy one read throws. I don’t think we will see a lot of run on 1st and second down and throw on 3rd and long scenarios.
Qbs are much more successful in certain situations, against certain opponents and on specific form and distances. Now there are situations that are not advantageous to throw against and you have to throw but I expect Jones will throw a higher proportion of his passes in favorable situations than other nfl QBs.
N

RIpats88 said:
I think Jones got overlooked and is still being overlooked because he's a pocket passer and not as mobile as the other guys drafted.

But we forget what's most important in the NFL really is reading the defense and making the right throws to the right guys. And Mac can do that. He has a high football IQ so he will do well.

Was manning, Brees or Brady the most athletic guys?
Click to expand...


Romo was never a great mover but move well enough. Mahomes ran a 4.80 forty. I think mac could work on how to move from the pocket when it’s breaking down. He can work on that during practices. Feeling the pressure around him.

PatsFans.com Supporter
His ceiling is probably Matt Ryan and I'm pretty ok with that.

I'm gonna be patient with Mac just like I'm patient with every other player which means I won't even start thinking about him being a bust for at least a season and a half of games.

Triumph said:
Without ever playing in an actual regular season NFL game?


Pretty much, IMO. I base it on Jones being far more pro-ready than Brady ever was in 2000.

PATSYLICIOUS said:
i see im not the only one INFURIATED by this!
Click to expand...

Definitely not happy with the mod who tempered with the thread title!

Wide receiver Kendrick Bourne said Newton’s “energy will definitely be missed” but that choosing Jones was “the best thing for the team.”
Click to expand... 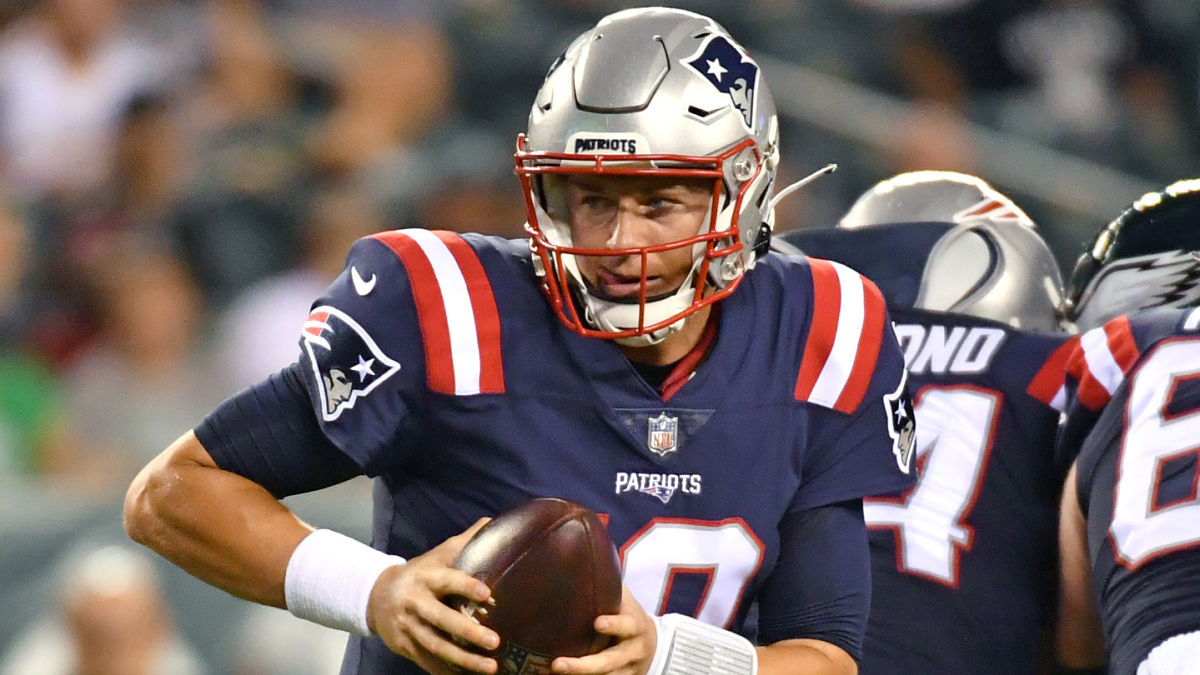 Ring 6 said:
Why can’t we have high expectations?
That’s one of the most enjoyable parts of being a fan.
Why would you want to be depressed at 0-0?
Click to expand...

Wait…. Weren’t you just saying in a different thread, how could San Diego fans enjoy last season cause they lost alot of games????

Hyped said:
Pretty much, IMO. I base it on Jones being far more pro-ready than Brady ever was in 2000.
Click to expand...

Alabama made him the starter 12 months ago. Jones has started a total of 15 games playing for the best team in the country and for the BB of college football.

Its time to put the cork back on the apple cider jug.
R

Seacoast Fan said:
Wait…. Weren’t you just saying in a different thread, how could San Diego fans enjoy last season cause they lost alot of games????
Click to expand...

Yes. I don’t understand the connection between being unhappy when you lose and being afraid to have hope before the season starts

cscirpoli said:
I personally think Mac has a better grasp of the offense and will have a much better 1st year than Brady from a stats perspective, I'm not saying his ceiling is GOAT, but I'm betting his floor is higher
Click to expand...

I remember when Brady surpassed Montana in yards, he said the game had changed so much from Montana’s era to Brady’s era.

I believe it would actually be considered a disappointment if Jones matches Brady’s 2001 production. Brady made the Pro Bowl in 2001, but if you have those same stats in 2021, you’re probably considered a bottom 10 QB.
You must log in or register to reply here.

OT: Fundraiser to help us start our family
2