TommyD4207 said:
That throw to Moss is still one of the best clutch throws I've ever seen.
Click to expand...

Moss beat Ty Law too. That jersey and logo looks atrocious on Law.

PatsFans.com Supporter
There were rumblings of an issue with Belichick, Brady, and Kraft. IMO it took a toll on Brady's play if I recall correctly. I remember posting at the time that Brady was probably demanding more than he should as a player under contract. Here it comes out years later. Brady had to drag his wife into it, not surprised. He's gone out of my life. Thanks, Brady, for the good stuff but not the whining.

in 12 we trust said:
Wow they stayed together a long time, I'll give them that
Click to expand...

Yep, can't fault either side for being human and it no longer working out. It's one of the several reasons why there will never be another run like ours. Not only do you have to field 2 GOAT level performers at the 2 most crucial positions on the team for winning purposes (the odds of that itself are astronomically low already), but they need to coexist for two decades. A GOAT QB having to play by all the rules as the rest of the team does,, no special priviledges or get out of jail free cards. Playing for a home town discount too to help the team's cap situation. Zero chance this happens again.
S

farn said:
They won the SB the very next season... was it on BB to loosen up ? Most owners would kill for that ONE championship.

Too many feelings. Brady is the greatest player the League has seen : competitive, clutch, hard working, good teammate, champ. Still, winning overtakes all of that. i’d choose winning every day over « making someone feel good ». Brady as a 40 year old is pretty sensitive about this stuff - if true. « Johnny Foxboro ». So what ? Get over yourself.
Click to expand...

I think Brady never minded being treated like other players, but part of that is recognizing the good with the bad. Brady accomplished things no quarterback in the history of the NFL accomplished. My impression is that instead of recognizing that, BB went out of his way to rip Brady for each and every mistake not matter how small oin part to show the team that there were no favorites. But in that ocntext Brady was indeed a whipping boy for BB. Brady, took it for 20 years. I imagine that after 20 years, it would wear thin on anyone. 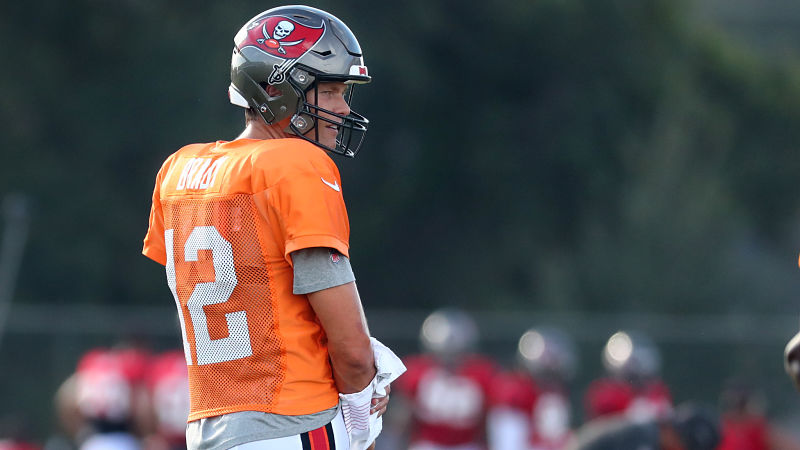 And I will admit to you that from what I’ve heard since Tom Brady departed, the Patriots did need a vibe change in the locker room because a dour Brady, which start to crop up at the end of 2018, took its toll on the Patriots last season. It was so bad that some of his teammates have admittedly privately that it was better for all involved that Brady moved on if he was going to have the same attitude this season.
Click to expand...

It later says something to the effect that « Brady had a RIGHT to be upset ». Really ? Because WR and his success is more important than what’s best for the team ?

Brady was more than great for twenty years. He was the pinnacle of greatness. But c’mon. The right ? He got paid, his team went 12-4, they fell short If their early season dreams.

You could see his attitude in the after game pressers, not surprised he left, surprised it lasted 20 years.
S

cmasspatsfan said:
You could see his attitude in the after game pressers, not surprised he left, surprised it lasted 20 years.
Click to expand...

Yep. That one presser after the Eagles game was an embarrassment.
S

Normally I’m not inclined to take Bedard at face value but the media narrative is anti Belichick not Brady. So in this case there might be a little fire to this smoke. Either way- hope he’s happier there and does well.
D

Brady is one of the most competitive athletes to ever live. Am sure that being denied a long term extension while being provided with an extremely weak supporting cast on offense bothered him. He wants to win and correctly assessed that the supporting cast was not up to the challenge. Have no doubt that he rubbed some people the wrong way just as I am sure many on the Bulls were happy when Jordan left for his first retirement.

Normally I’m not inclined to take Bedard at face value but the media narrative is anti Belichick not Brady. So in this case there might be a little fire to this smoke. Either way- hope he’s happier there and does well.
Click to expand...

I don't doubt this much. It's just like being in any workspace where someone is openly unhappy... it does become draining because you become involved in the drama eventually, even when you try to stay out of it. And I would imagine it's even worse in a professional locker room because a successful team must be closely bonded (mostly) and it was the unquestioned leader, in this case, who was throwing a fit.

Disclaimer: This response in no way indicates I'm on your side, Rob Parker Jr.
Last edited: Sep 9, 2020

You’re a 100% correct. Christian Fauria confirmed it on his show the other day. He said he can’t recall one time during his time in New England that Belichick gave Brady any praise during a meeting. Not after any of the clutch performances, comebacks, dominating games, etc...

No matter who you are, that has to wear on you after a while. Everyone in the building knew Brady’s accomplishments but Bill still treaded him like Johnny Foxboro. Pretty telling after the Jaguars playoff game he heaped praise on Amendola but when asked about Brady’s performance with his hurt thumb he said “we aren’t talking about open heart surgery here”.

Belichick needed Brady just a much as Brady needed Belichick.

I've sided with Brady over BB in almost every situation. While both were an important part of what was built here Brady was always the most important piece. Belichick is probably the greatest coach or all time, but I feel like a lot of talk about his style of coaching when it comes to culture is overblown. Many fans and media people act like Bill does no wrong when it comes to how he manages a locker room, or how he handles free agency, or how he handles the media. As if any coach doing anything different is doing it wrong. That just isn't true IMO. While I think BB is the best X&Os defensive coach, I've questioned how he handles other things in the past.

When people talk about BB a lot of that has to do with the consistency he's had here for years and getting teams and players to repeatedly buy in. A lot of that has to do with Brady. I always felt he was the bigger draw for players and teammates. Him standing right beside BB year after year repeating the message gave it weight and longevity it otherwise wouldn't have had. The knock on BB before 2001 is he was an amazing coordinator but not an amazing head coach. Without Brady that well may have never changed.

Also it needs to be said that much of BB's legacy pre-patriots was based on the 2 Giants wins were he was the defensive coordinator. While I think he is a fantastic defensive coach can we please admit that he had an amazing cast of star players to work with. Not to mention the guy who people consider to be the GOAT defensive player Lawrence Taylor who was entering his Prime as BB took over. While that doesn't take away from him being a great defensive coach, it is worth saying. He built great defenses in NY but he did it with great players. It would have taken a good amount of incompetence to not produce good results. It is interesting that the only time BB failed to have success in his career is with the Browns when he lacked a GOAT player.
Last edited: Sep 7, 2020
C

Pats will be having a vibe change this season all right...from a winning vibe...

I’m at piece with the Brady departure. Anyone who throws shade at him can pound sand.Its time to move on.

PatsFans.com Supporter
Brady, as so often happens with people who achieve success, forgot what got him there.
Part of the reason he was so great was because he took his crap sandwich just like everyone else. When the star of the team buys in, everyone else has to follow. That buy in set the tone for everyone else and it’s what led to their remarkable success.

If he loses that, then he loses his greatest strength.

Taco said:
I’m at peace with the Brady departure. Anyone who throws shade at him can pound sand.Its time to move on.
Click to expand...

Fixed it for you, Taco!

This book is an awesome read, I haven't been able to put it down. You can tell that one of the big sources for the book are the Kraft family. I found the first 150 pages about Kraft's life fascinating. The BB stuff so far has been taken from other sources IMO. No deep thoughts on his moves or any of the sort. I'm only 190 pages in so maybe that will change. The whole thing also makes Parcells look like a tyrant, lol.

Conflicting reports on what Brady wanted from Kraft after 2017: "The Dynasty" says Brady wanted out, but Wickersham said the opposite
2 3 4

P
NEW ARTICLE: Patriots Fourth And Two Podcast: Do You Think Belichick vs. Brady Is Relevant?