captain stone said:
A WR worthy of being a member of the defending SB champions has to fight through the contact and not lose his concentration. He didn't, so maybe he isn't.
Click to expand...

That's not by luck or lack of fighting through contact. Let's see how he does the rest of the way.
R

Hyped said:
1.) Nowadays a "starting WR" means one of your top 3 guys since we will be playing a lot of 11 personnel this year, IMO.

2.) My current WR rankings (assuming full health and no suspensions):

*Guys in BOLD are locks for week 1.

3.) In any case, I can probably see Meyers getting significant snaps but maybe not start as he would not be in the slot.
Click to expand...

I think given the rhetoric on Harris, a player with NFL experience, has gone from stud to dud, I’d pump the brakes on Meyers being WR2. We’ve seen a lot of young WRs look good early on and fizzle our, many ending up cut.
R

That's not by luck or lack of fighting through contact. Let's see how he does the rest of the way.
Click to expand...

It could be by circumstance with that circumstance being the length and catchability of throw. In other words you better catch a High % if they are all screens, dump offs and short passes, but no one catches a high % of intermediate and deep throws.
That number does indicate he wasn’t dropping a lot of passes though regardless of what the throws were.
R

robertweathers said:
Dorsett is a lock as long as he isn't traded
Click to expand...

Why would he be traded if he is a lock

AndyJohnson said:
Why would he be traded if he is a lock
Click to expand...

He has the talent and the cred to make the club. Hes not a JAG. Thats a lock in my mind.

PatsFans.com Supporter
Tough day for Etling. Nice guy but probably not going to end well for him

patfanken said:
Not for nothing, but I was just thinking. The Pats played a preseason game on Thursday, in which most of the starters didn't play at all and the rest played minimally. THEN they had the next THREE days off before coming back to the field on Monday where they had a vigorous practice. Tomorrow they have a one hour walk through, and they are off to Nashville for their work with the Titans.

Sorry but that doesn't sound like any TC I remember. The next time you hear a player of today say he hates TC, remember this SOFT schedule and compare it the 2 a days of mere decade ago, let alone the hellish TC's of my era. WOW!
Click to expand...

There’s a meme for this but I will not post it out of respect and love.

Patjew said:
There’s a meme for this but I will not post it out of respect and love.
Click to expand... 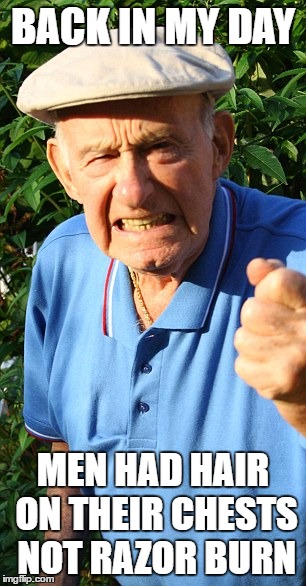 Sounds like Ross was released, not placed on IR.

BadMoFo said:
Sounds like Ross was released, not placed on IR.

He was released with an injury designation, meaning he'll revert to IR if unclaimed

robertweathers said:
Yea I guess we all have high hopes for players who didn't shine in other stops but once they put on the Flying Elvis become rock-solid players.

I still think Harris has the potential to be a decent WR4/5 but the problem is he is behind JE, Harry, Meyers and Dorsett. He might even be behind Berrios as he does not return punts.
Click to expand...

Berrios ain’t making the team, harry is already far better than him at WR

The other logical choices were the "old man yells at cloud" meme and a "get off my lawn" meme, but the one I picked seemed less worn-out.

Obviously, Harry is light years ahead of Berrios.

Of course Harry is better. Why compare those two?

Zuma said:
Tough day for Etling. Nice guy but probably not going to end well for him

Yeah I see that. I don't know if "better late then never" applies at this point.

Obviously, Harry is light years ahead of Berrios.
Click to expand...

Berrios is battling sup: that's all he can do. Slot guys do well here traditionally. I feel like Fatty Matt Patricia is going to raid our WR and CB Pipeline.

PatsFan2 said:
I feel like Fatty Matt Patricia is going to raid our WR and CB Pipeline.
Click to expand...

After he raids the team fridge

Zuma said:
After he raids the team fridge
Click to expand...