Michael Bishop was a healthy scratch for all but one game his rookie season. Because of his strong arm and mobility, he came in as a substitute for Drew Bledsoe on the final play of the half in Week 6 of the 2000 season vs the Colts, and completed a 44 yard Hail Mary touchdown.

Bishop went to NFL Europe the following spring, while his fan club that was based on one throw grew. The oft repeated concept of fans loving the backup on a losing team was in full force, and it hit a crescendo when Bishop was released during 2001 training camp. Thankfully Bill Belichick wasn't listening, and kept Tom Brady on the roster instead. Bishop finished his Patriot career with 8 games played, going 3/9 for 80 yards and one TD. 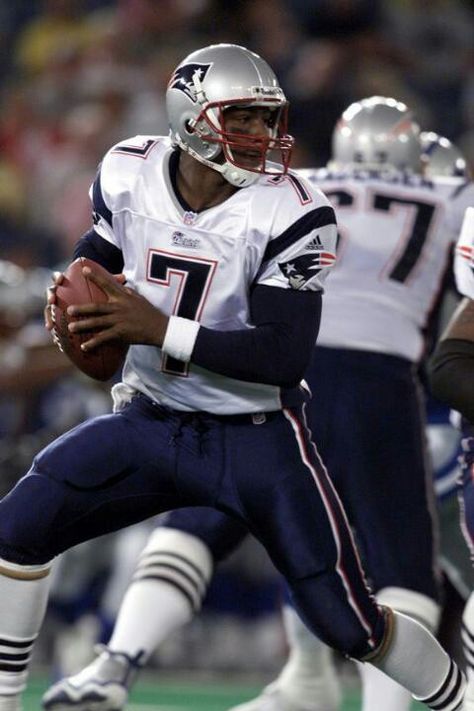 Green Bay picked Bishop up after being waived by the Pats, but the Packers released him less than two weeks later. He did find success north of the border, winning the Grey Cup in 2004 with the Toronto Argonauts. Overall he played in the CFL for ten seasons, plus a couple of years in the Arena League, in between stops in two lower level indoor football leagues in 2009. 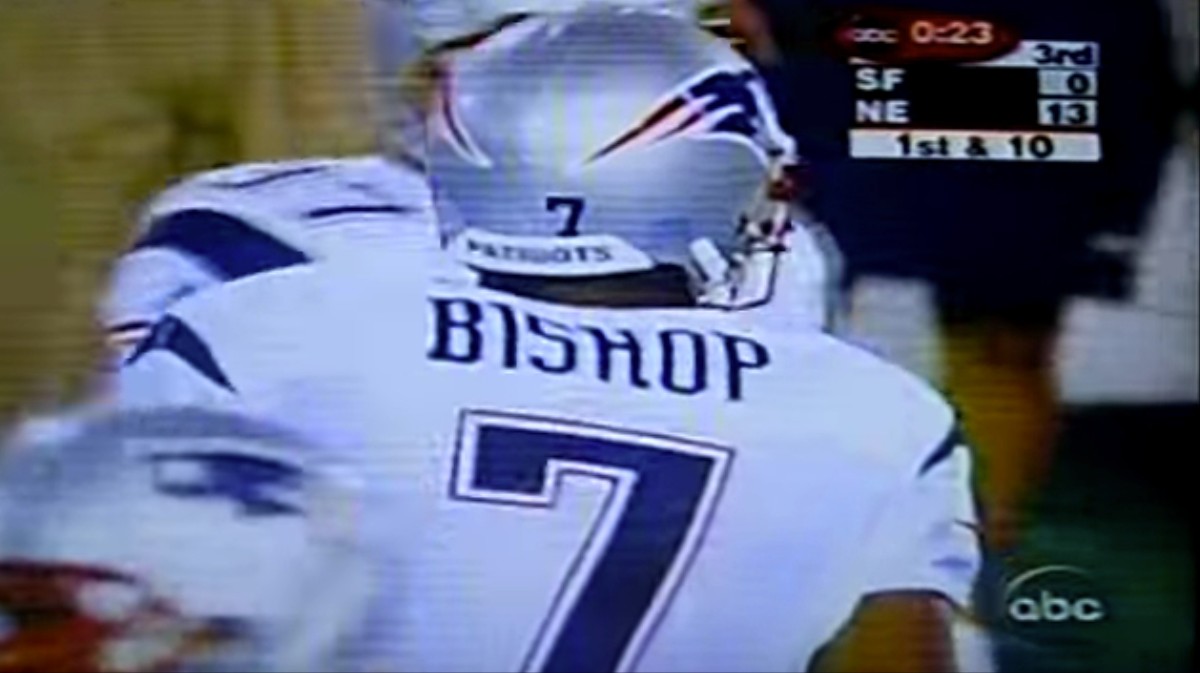 Michael Bishop Is Rooting for Tom Brady, Who Beat Him for the Patriots Starting QB Job

In 2000, dual-threat quarterback Michael Bishop—and not relative unknown Tom Brady—was seen as a better prospect for the New England Patriots. Now Bishop plans to be in the stands for Super Bowl LI, cheering on his former teammate. 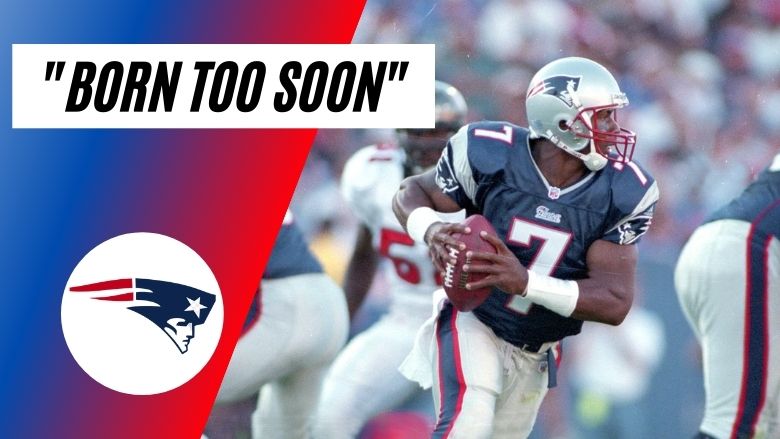 The Patriots drafted Mac Jones this year. His lack of athleticism is considered an issue. Back in 1999, they selected a QB whose athleticism was his strength.

PatsFans.com Supporter
Just goes to show how the memory fades - I really thought this took place when Pete was our coach but it's 2000 and you can see Weis...

Staff member
Today in Patriots History
Doug Beaudoin​
Of all the May 15 Patriots birthdays, Doug Beaudoin was by far the most impactful.

Doug Beaudoin played 45 games with 20 starts for the oh-so-close Patriots of the late seventies. In week 8 of '78 he intercepted two Bob Griese passes that led to touchdowns in a 33-24 win that put the Patriots in a first place tie with the Dolphins at 6-2. Injuries limited his playing time the following year, and he ended up playing with the Miami in '80, San Diego in '81, and then spent three seasons with Tampa in the USFL.


Former NFL Player: I Guarantee I Have CTE


Defensive back Doug Beaudoin was a ninth-round draft pick out of the University of Minnesota in 1976. Beaudoin played with the Patriots through 1979, with the Dolphins in 1980 and with the Chargers in 1981. From 1983 to 1986 he played with the USFL's Tampa Bay Bandits, and Beaudoin now lives in the Tampa area where he works in sales for the FX Marketing Group. He is one of the more than 4,500 former NFL players who filed suit against the league over concussions and other head injuries.​ 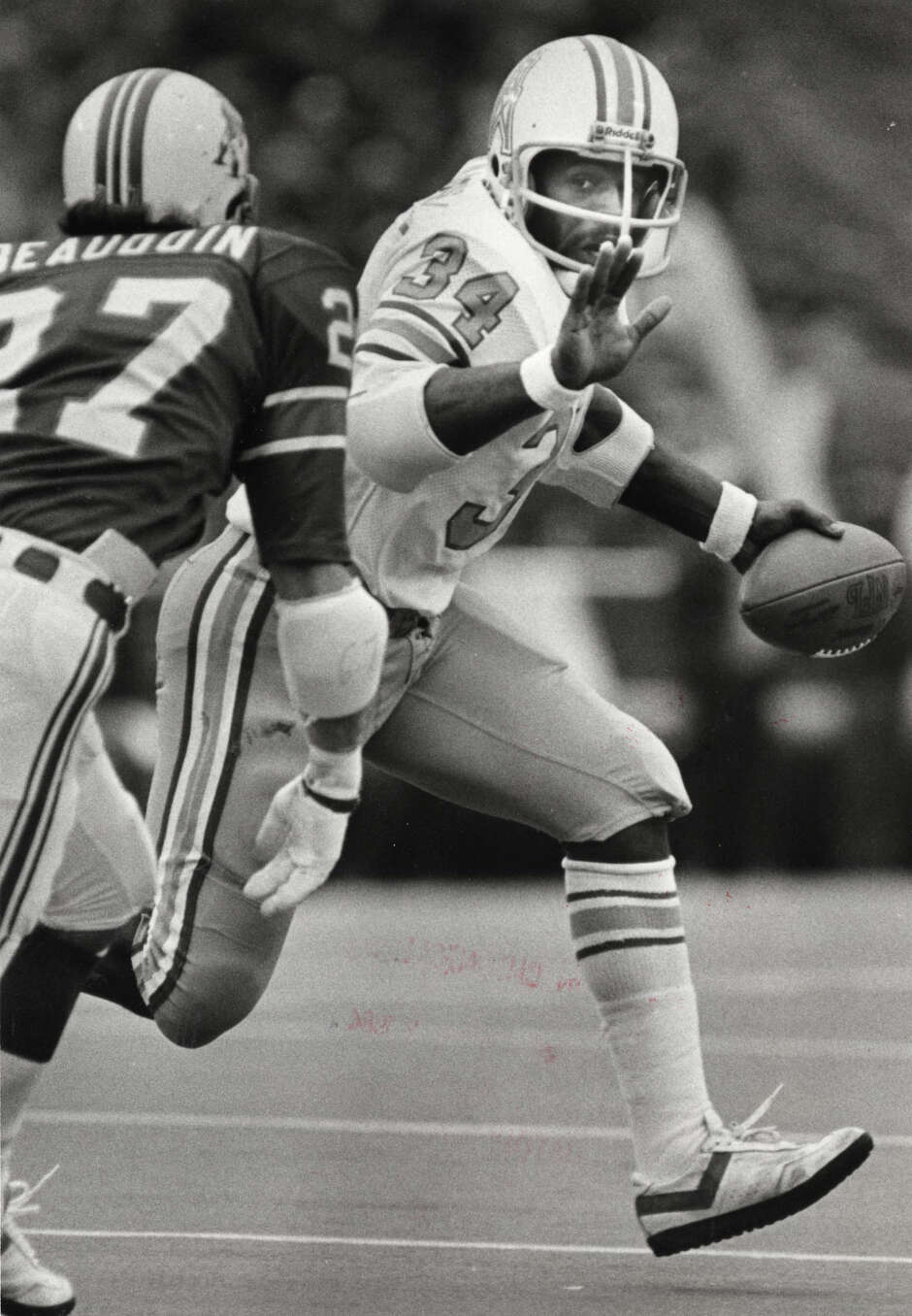 Nobody was challenging Doug Beaudoin to a friendly game of anything back in 1971. Unless, of course, said challenger was up for a butt whooping. "I could beat just about anybody at anything," Beaudoin said. "Skiing, golf, pingpong. Whatever you w...


Beaudoin, a 1972 JHS graduate, was named North Dakota High School Athlete of the Year in '71 after leading the Blue Jays to an 8-1 record in football, a 22-5 mark in basketball and placing second in the Class A state long jump competition. Beaudoin would become a four-year starter at safety in the NCAA's Big Ten Conference for Minnesota, and in 1976 he was drafted by the New England Patriots in the ninth round of a then 17-round NFL Draft—the same draft in which New England selected future NFL Hall of Fame cornerback Mike Haynes fifth overall.​
​
Nobody was challenging Doug Beaudoin to a friendly game of anything back in 1971. Unless, of course, said challenger was up for a butt whooping. "I could beat just about anybody at anything," Beaudoin said. "Skiing, golf, ping pong. Whatever ...​ 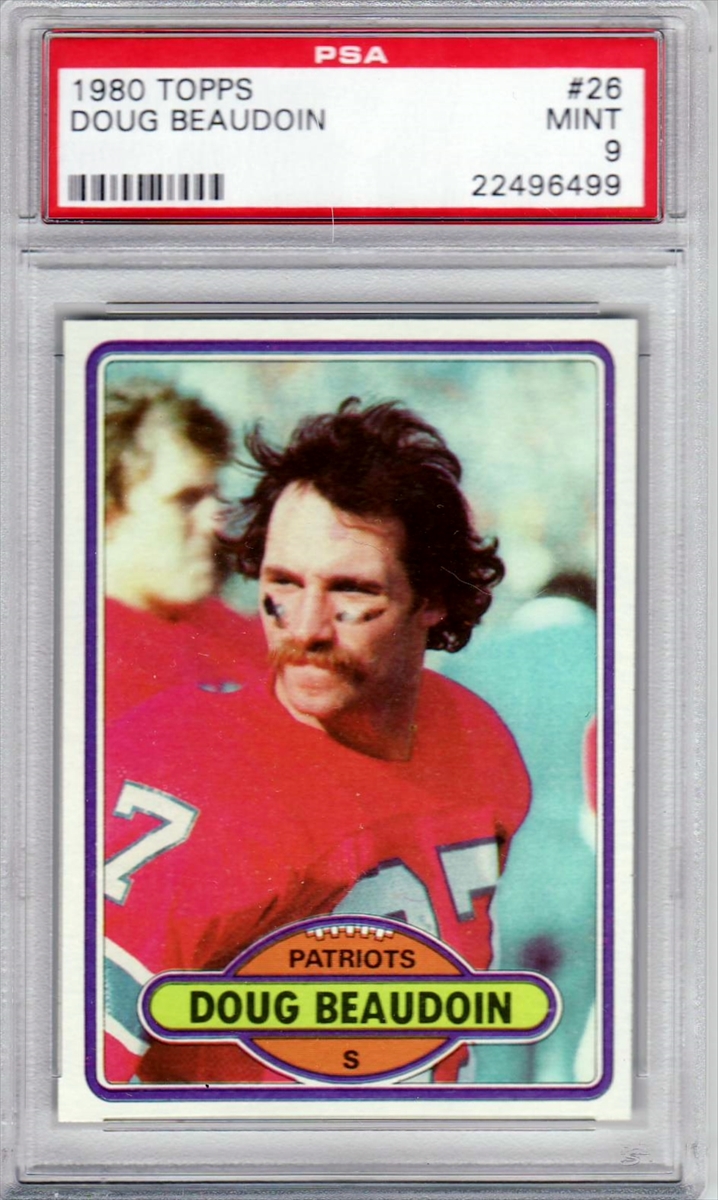 ​
Beaudoin played seven seasons in the NFL, five for New England and making stops in Miami and San Diego in '80 and '81, respectively. Beaudoin recorded four interceptions during his NFL run, but was hampered throughout his professional career by an injury suffered during his senior track season at Jamestown High.​
​
"I'll never forget it," Beaudoin said. "We were running the 440 relay in Valley City and it was about 30 degrees and sleeting. I took the baton for the home stretch, probably ran about 30 yards, and my hamstring snapped. I was probably never the same after that."​
​
The born athlete said his time in the 40-yard dash fell from approximately 4.40 to 4.60, and hamstring issues would cloud weeks of strong play on the gridiron even as Beaudoin ascended to the sport's highest level. His New England teammate in the secondary, Mike Haynes, brought up Beaudoin's injury-prone legs while the two shared a moment in Canton, Ohio, in 1987.​
Haynes was getting his call to the NFL Hall of Fame.​
​
"We were sitting there and I was congratulating him on his Hall of Fame career, and he said, "You know what, Doug? If not for your hamstrings, you'd probably be sitting here too," Beaudoin recalled.​

Doug finished his pro football career with the Tampa Bay Bandits of the USFL in 1985. He remained in the area, and is now the VP of Sales and Entertainment for the FX Marketing Group in Tampa.

Jeff Boschee, Whitney Carlson Bruins, Doug Beaudoin, and Mike Peluso will be enshrined into the North Dakota Sports Hall of Fame this summer in Jamestown.

Undrafted out of Arizona, Harris spent his first six NFL seasons with Washington. As a rookie he led the league with 12.2 yards per punt return. Over those six years he averaged 8.4 yards on 119 punt returns, with three touchdowns. Harris also averaged 22.8 yards on 102 kickoff returns. 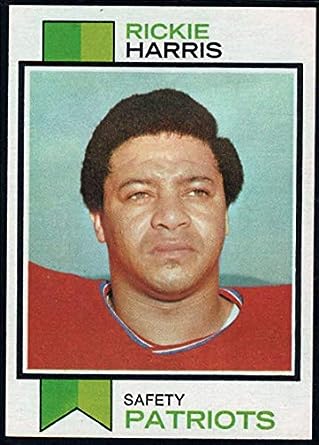 Harris was used sparingly on returns with the Patriots, but saw plenty of playing time at safety. He appeared in all 28 regular season games over two seasons for the Pats, with 21 starts. Harris had three interceptions during his time with New England, then spent two years in the WFL.

The Player Whose Bell Stayed Rung

On the same day a federal judge approved a billion-dollar settlement in the NFL concussion litigation, Rickie Harris told me a story I’d wanted to hear for a long time. It’s a legend from his days with the Florida Blazers, possibly the worst-managed franchise in professional sports history.


Most Blazers players—a mix of NFL refugees like Harris and rookies right out of college—didn’t get paid for weeks at a time. Some didn’t get paid at all. Yet head coach Jack Pardee, forced to pay for locker room toilet paper out of his own pocket, used victimhood to bind his squad. The Blazers made it all the way to World Bowl I, the first and only WFL championship game.​
The specific tale I’d been chasing for years held that just before kickoff of that big game, one of the unpaid Blazers took a stand on behalf of his penniless brothers by snatching the coin from the coin toss—-and keeping it. I’d heard long ago that Harris, the Blazers’ defensive captain, was that guy.​
Yup, says Harris: “They called ‘Heads!’ and I scooped it up and said, ‘At least I get paid this week!’” We’re both laughing at the punchline.​ 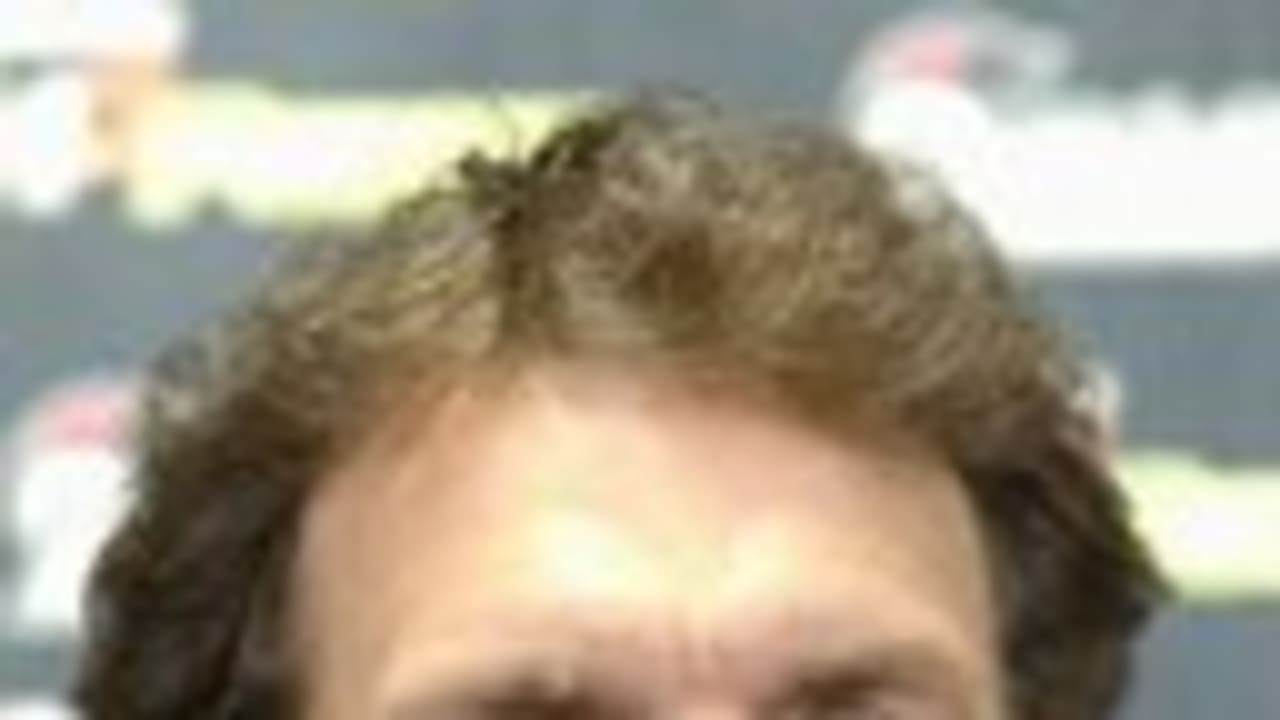 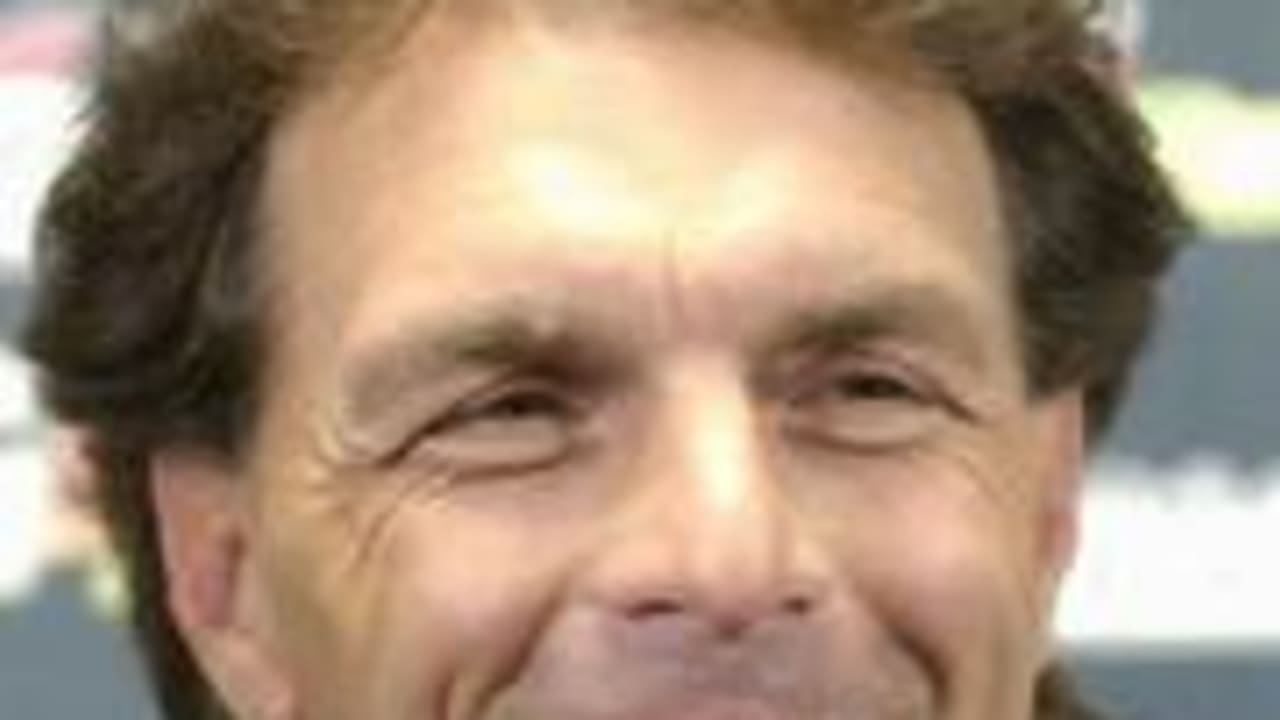 Boston sports legend Doug Flutie announced his retirement on Monday after playing pro football for over two decades. The former star of the USFL, CFL and NFL will now focus his attention on being a college football analyst.

Flutie calls it a fantastic career

Doug Flutie retired from pro football Monday, ending a 21-year career in which the Heisman Trophy winner puzzled both opposing defenses and his own coaches with his unconventional style at quarterback.

Cliff Olander, 66 (5/15/55); born in Hartford.
QB played in 15 games over three seasons with the Chargers. Later won the Grey Cup with Edmonton in the CFL, and then played in the USFL.

Plenty of other famous (and infamous) pro football players were also born May 15, including:
- LB Ray Lewis, aka RLKAG
- QB Ryan Leaf
- RB Emmitt Smith
- WR Rod Smith
- S Joey Browner
- LB Don Shinnick
- WR Desmond Howard: annihilated the Patriots with his returns in Super Bowl 31.
I had the pleasure of meeting with him once at a charity fundraiser, and we spoke for quite some time. I have to say that Desmond Howard is a super nice guy who, on a side note, was extremely positive and complimentary of the Patriots, and Bill Belichick specifically.
You must log in or register to reply here.
Share:
Facebook Twitter Reddit Pinterest Tumblr WhatsApp Email Share Link