April 13 in Pats History: Town of Foxborough approves land use for Stadium

April 13, 1970:
At their high school gym, the town of Foxborough gave formal approved on a proposal that E.M Loew, the movie theatre chain owner and president of Bay State Raceway, would give the Boston Patriots land to build a stadium next to the horse race track on Route 1, in exchange for a cut from the parking revenue. The proposition was approved by a vote of 1,852 to 84.

Brown was a 7th round 2015 pick out of Florida by San Francisco who made the roster, but the 49ers felt Brown's conditioning and offseason work ethic was suspect. After ending 2017 with a shoulder injury the Niners used the ninth overall pick on Notre Dame tackle Mike McGlinchey. Brown had only one year left in his contract, so GM John Lynch got what he could for the right tackle. The Patriots were very thin on the offensive line after Nate Solder had signed with the Giants, so the trade was viewed as a win for both sides.

Initially Brown was viewed by many as backup depth. LaAdrian Waddle, John Ulrick, Isaiah Wynn and Antonio Garcia were perceived to have a better shot at filling the open spot at left tackle created by Nate Solder's departure in free agency. At most Brown was viewed as veteran insurance for the rookie Wynn, the 23rd overall pick of the draft.

Unlike his tenure in San Francisco, Brown dominated training camp. His dynamic skills earned him the starting left tackle position, answering the Pats top offseason question mark. Over the course of the 2018 season Brown continued to excel, and was arguably the best tackle in the NFL playoffs.

While that performance was great for the 2018 Super Bowl winning team, it also meant that Brown would become one of the most coveted free agents in 2019. On March 11 he signed with the Raiders and became the highest paid offensive lineman in NFL history.

Brown missed five games in 2019 with a pectoral injury, and 11 more last year between a calf injury, the covid list and a knee injury. Raiders GM Mike Mayock elected to move on, implying the injuries were due to training issues rather than circumstances beyond his control. In a press conference Mayock stated "What he needs to do more than anything is get himself in the best shape of his life and come out ready to prove that he is a dominant tackle in the National Football League. That’s all it takes. If Trent gets in shape and stays committed, there’s not a better talent out there." Two weeks later Brown was traded to New England.

Brown's return to New England once again offsets a free agency loss on the offensive line, albeit indirectly this time; his addition to the roster paves the way for Michael Onwenu to slide over from RT to LG, to fill the vacancy left by Joe Thuney. 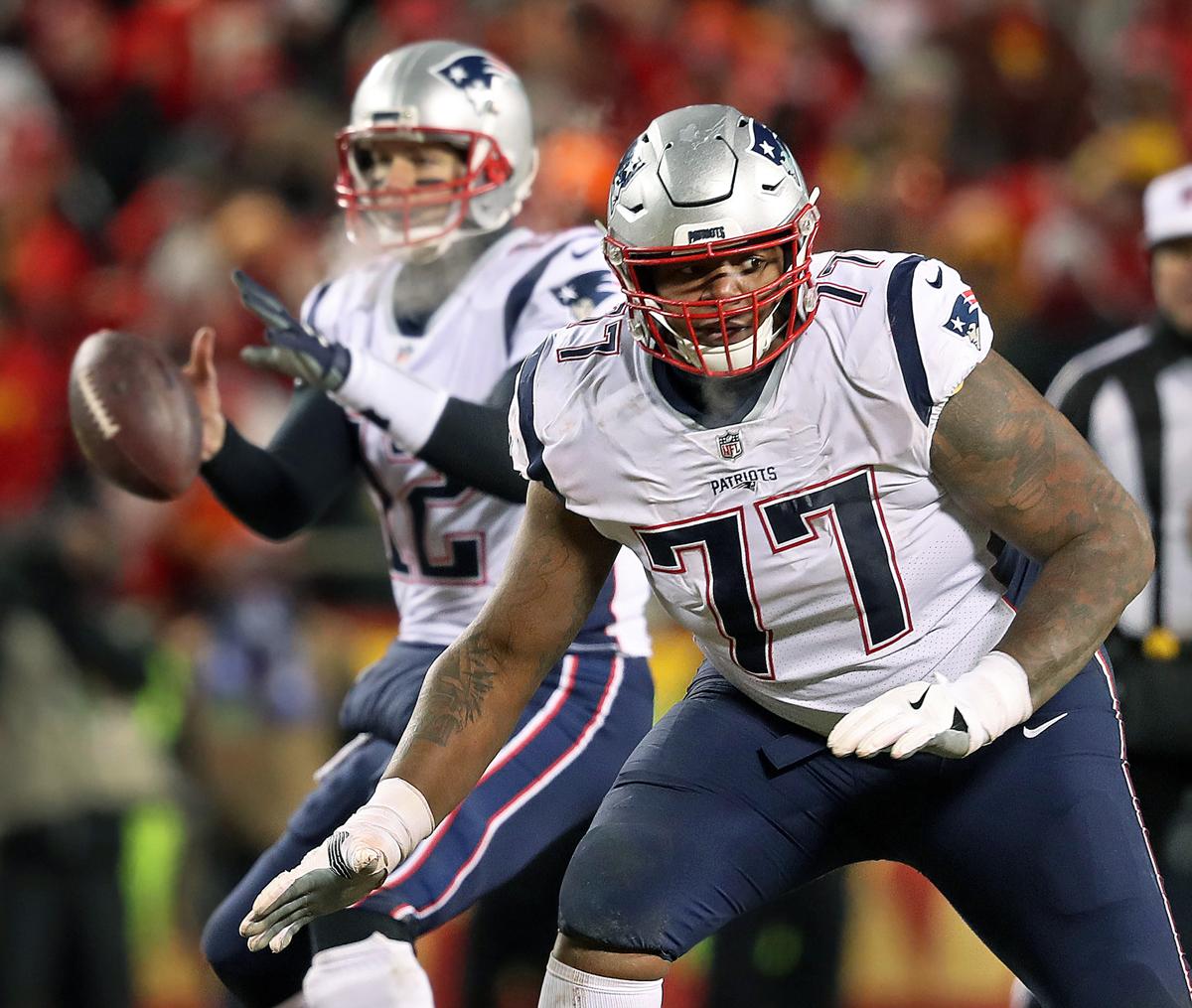 'Mount Washington' had been a four-time Pro Bowler with Buffalo and Chicago - but was 35 years old and coming off a year where he missed all but two games due to a fractured leg and torn ligament in his foot. As a result the Pats were able to obtain him for just a 2004 4th round pick, which turned out to be a bargain. Washington was superb, and a key element of that incredible defense that led the Patriots to their second Lombardi trophy. That performance and Super Bowl ring led to nice free agent payday with the Oakland Raiders.

Ted Washington played in 236 games over 17 seasons in the NFL, plus another 13 playoff games. He finished his career with 755 tackles (603 solo) and 34½ sacks. In addition to his Super Bowl ring, Washington was named to four Pro Bowls and was an All Pro in 2001. In his spare time Washington now coaches high school football in South Carolina. 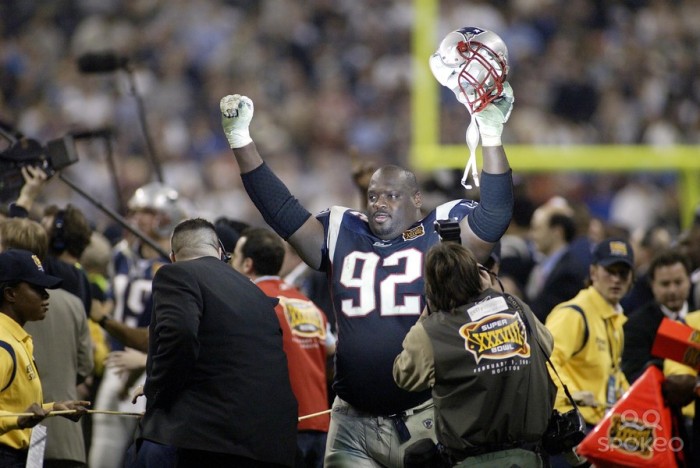 Consider this: Josh Gordon is the only player with back-to-back 200-yard receiving games in NFL history, and he led the NFL in receiving yards at 22 years old while playing in just 14 games - while catching passes from Jason Campbell, Brandon Weeden, and Brian Hoyer!

Fast forward past not one, but two entire seasons in his prime lost to substance abuse suspensions. (Why the NFL feels compelled to still buy into Reefer Madness/Reagan Era policies that ignore 'Life, Liberty and the Pursuit of Happiness' regarding what citizens do in their free time - all while state after state comes to their senses regarding what one does in their one free time.... but I digress).

Entering the 2018 season the Patriots had an issue at wide receiver. Brandin Cooks had been traded, and Julian Edelman was not only coming off an entire season missed due to injury, but was also suspended for the first four games. That left a returning WR corps consisting of Danny Amendola (61 receptions for 659 yards in 2017), Chris Hogan (34/439) and Phillip Dorsett (12/194). Yikes.

The Pats attempted to reload at the position in the offseason but struck out. Veteran wide receivers Jordan Matthews, Kenny Britt, Malcolm Mitchell and Eric Decker failed to make the week one roster, as did about a dozen rookies. In week one the Patriots totaled 96 yards from the WR position, with 13 of those yards coming on three running plays. Depth was so slim that Riley McCarron had not only made the roster, he was getting playing time.

Gordon was able to pick up the Patriot offense immediately, unlike other veteran wide receiver failures like Joey Galloway and Chad Johnson. He had 40 receptions for 720 yards in 11 games, averaging 18 yards per reception. Although Gordon was not available for the playoffs, he was an important part of the Pats being able to go 11-5 and become 2018 NFL champions. He was reinstated and played in the first six games of 2019, but was placed on IR with a knee injury and waived on Oct 31. Gordon was claimed by Seattle but after five games was suspended yet again, and released. Earlier this year Gordon played in the Fan Controlled Football League, which is essentially Arena Football but fans call the plays; the rate of pay for players is $400-$750 per week, plus room and board.

Josh Gordon's final stat line with the Patriots is 60 receptions for 1,007 yards (16.8 ypc), with four touchdowns. Perhaps most notable was his first Patriot TD: it was also Tom Brady's 500th touchdown pass. 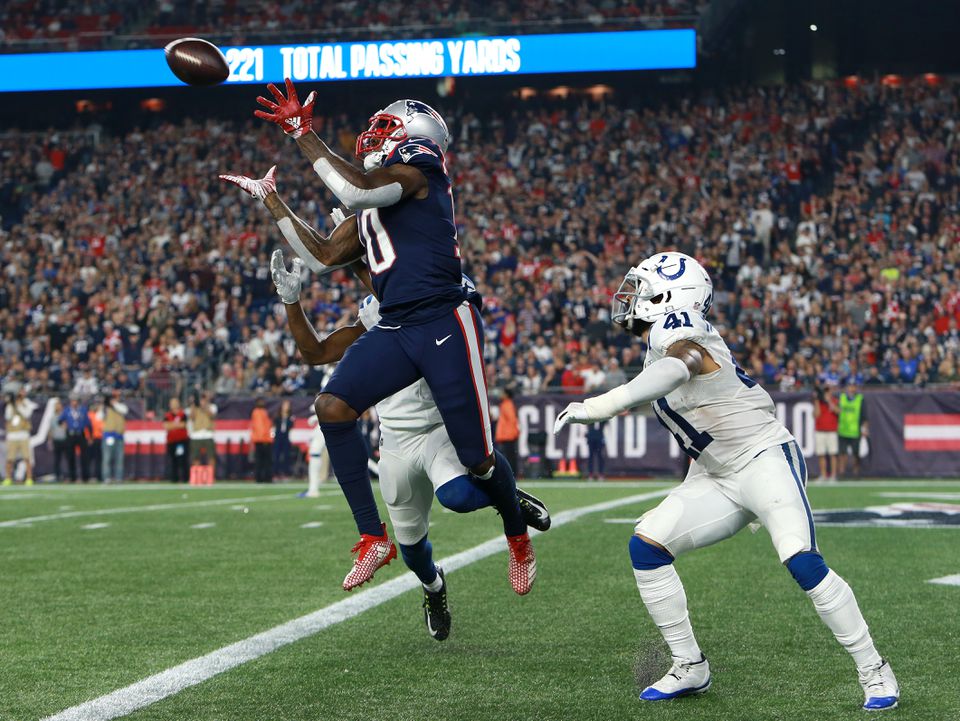 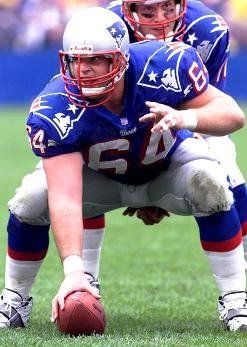 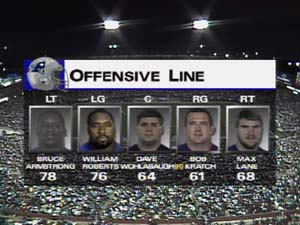 Dave Wohlabaugh started 57 games at center with the Pats, and is a member of the Patriots' All-Decade Team for the 1990s. After the '98 season he signed as an unrestricted free agent with Cleveland, in what was then the largest contract ever for an NFL center. He ended up playing in 128 games over nine NFL seasons, plus eight playoff games.

The free agency loss of Wohlabaugh and three other players is what resulted in the Pats receiving a 6th round compensatory pick in the 2000 draft (Tom Brady) - though his departure is aligned to the Pats gaining a 4th round pick in that draft, rather than #199.

Dave now works as a financial consultant in Cleveland.

After three seasons in Buffalo, Monty Brown signed with New England as a restricted free agent, and the Bills refused to match New England's offer. He primarily signed with the Pats because he wanted to be closer to WWF headquarters in Stamford CT. Geography lesson here Monty: the Giants or Jets would have been a more suitable choice if that was your motive.)

In '96 Brown appeared in 11 games with seven starts for the Pats. A year later he quit pro football and began training full time to become a professional wrestler. But after the death of his sister Monty decided to retire from pro wrestling, in order to spend more time at home taking care of his extended family. Since then Brown has operated Alpha-1 Fitness in his hometown of Saginaw, Michigan.


There are also three old timers born on this date with a New England connection, all with very brief football careers:

Love that photo of Trent Brown helping keep Brady clean during the AFCC in KC...

loved dave wohlabaugh as much as i hated damien woody... thought he was a bad ass on the line...
C

loved dave wohlabaugh as much as i hated damien woody... thought he was a bad ass on the line...
Click to expand...

Wohlabaugh leaving as a free agent after 1998 led to Booby Grier having to draft Woody in 1999...

captain stone said:
Wohlabaugh leaving as a free agent after 1998 led to Booby Grier having to draft Woody in 1999...
Click to expand...

only center in the league who couldn't actually play center ... the epitome of a pete carrol draftee
C

He was a pretty good blocker though, and fortunately we had Mike Compton to help with the shotgun snaps...

captain stone said:
fortunately we had Mike Compton to help with the shotgun snaps...
Click to expand...

yeah, well, that pretty much says it all about damien woodys tenure with the Patriots ... one bloke i wasn't sorry to see leave ... ymmv
C

From one Boston College Center to another...

IllegalContact said:
the guy missed 2 games in 5 years......he was a good ball player

Emotions? Think you mean opinions... That's mine and I'm sticking to it...

Pape said:
Emotions? Think you mean opinions... That's mine and I'm sticking to it...
Click to expand...

I said I loved wohlbaugh as much as I hated woody... It's a comparison of two players, ie my opinion... Never said "I hate damien woody"

It's not emotional... the whole exchange was put into context with the simple acronym ymmv... meaning I understand others my not agree with my OPINION

Pape said:
I said I loved wohlbaugh as much as I hated woody... It's a comparison of two players, ie my opinion... Never said "I hate damien woody"

It's not emotional... the whole exchange was put into context with the simple acronym ymmv... meaning I understand others my not agree with my OPINION
Click to expand...

it's sounds emotional......maybe you just used the wrong words to express yourself......you should work on that

IllegalContact said:
it's sounds emotional......maybe you just used the wrong words to express yourself......you should work on that
Click to expand...

I think what I said was pretty straight forward and easy to understand... Maybe you might want to work on reading comprehension?
You must log in or register to reply here.